(Editor's Note: Amy Allen's new CD, "Someday Is Today", will be released on Sept. 24. Amy will celebrate with a CD release party and concert at The Row Kitchen & Pub in Nashville on Sept. 26. The first single from the album recently hit the Top-50 of the New Music Weekly Country Main Chart.)

It’s not easy to put Amy Allen in a musical box. Her second CD, “Someday is Today,” is a colorful mixture of country, pop, Americana and the blues. It’s also the perfect soundtrack for the new season. This release is unique in its joyfulness and hopeful attitude. Even the album artwork has the artist smiling and embracing her guitar. It’s clear that Amy is re-energized after returning from a musical hiatus and wants to share that excitement in her music. The album is even more personal as all 11 songs were either written or co-written by the artist. Amy’s positive attitude is most clearly revealed through the first single “Someday is Today.” This catchy earworm of a song will not leave your head for days! It’s no surprise that the song is gaining airplay across the country and in Europe. This is an anthem for chasing your dreams. 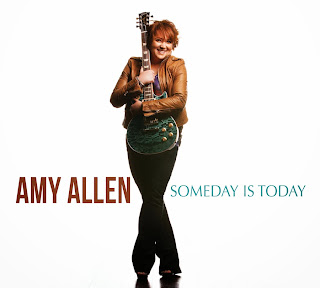 Another standout is “Josie Rae,” a song written about Amy’s daughter. It has an undeniable hook and joy oozes out in every note. The artist knows some of her listeners might not have kids, but they can connect with the feeling of joy that another person can bring.

The album has something for everyone, including heartbreaking ballads. “Cryin’ Time” allows Allen a chance to show off her emotional vocals. She pours out all the feeling into the lyrics:

This Patsy Cline-esque ballad is the kind of classic that will stand the test of time.

Amy’s influences can easily be heard in sassy songs such as “Thought of Being Alone.” This song would not be out of place on a Bonnie Raitt or Wynonna album. Meanwhile “Abbey Lane” is a song any Beatles fan would enjoy. It is full of Beatles references, and it’s fun to pick all of them out. From "Penny Lane" to "Abbey Road", there’s a lot for Beatleheads to find!

“Someday is Today” is hopefully the first of many musical offerings from the talented El Dorado, Ark., songwriter/artist. Don’t call it a comeback. This time Amy Allen has truly arrived, and Nashville is more than ready for her musical take over.

Amy’s album, “Someday is Today”, is now available at iTunes and other major online retailers.

Learn more about the artist and her music at http://www.TheAmyAllen.com.

Posted by Chuck Whiting at 9:46 AM