The WannaBeatles to Stage 'Welcome Back, Paul' Party and Concert on Oct. 16

NASHVILLE, Tenn. (September 2014) – The WannaBeatles have walked the Grammy Red Carpet, appeared on a national TV talk show, and performed for thousands of Beatles fans from coast to coast -- but they "still" haven't met their idol, Sir Paul McCartney. 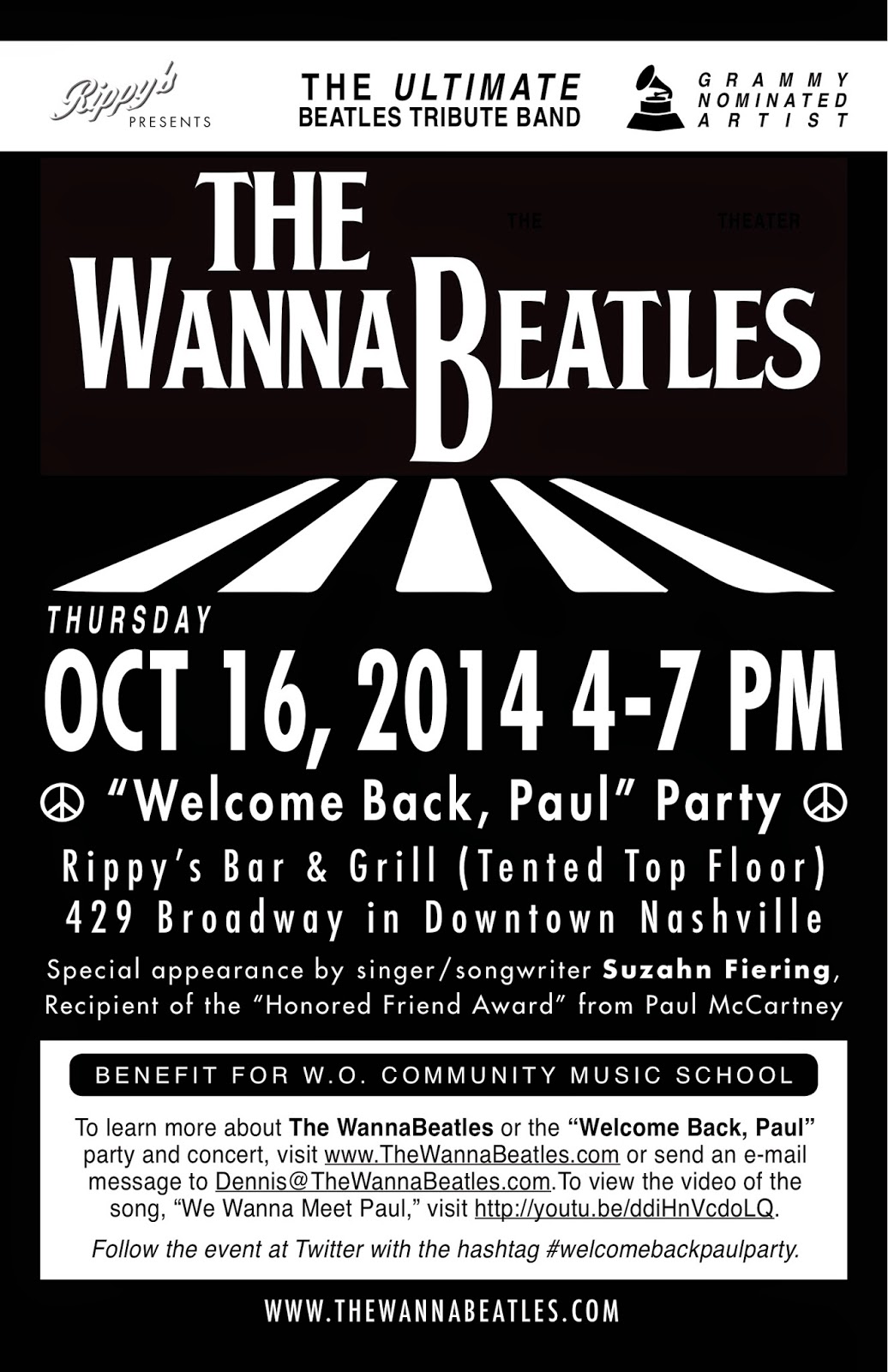 So with tongues firmly planted in their cheeks, the popular Beatles tribute act is offering Paul another chance to say “Hello, Goodbye” to them. This time band members will host a “Welcome Back, Paul” party and concert from 4-7 p.m. Oct. 16 (Thursday) at Rippy's Bar & Grill at 429 Broadway, just hours before McCartney’s own Nashville concert across the street at Bridgestone Arena. Fans of Paul (and “with a little luck” Paul himself) can enjoy the celebration under the tented top floor of the venue or at the corner of Broadway and Fourth Avenue below. Donations from the event will benefit the W.O. Smith Community Music School in Nashville.

"Paul’s people have been trying to set up a meeting with us for months," quipped band member and two-time Grammy winner Dennis Scott. “All kidding aside, it would be a dream-come-true to finally meet him."

The band will serenade Paul with many of the songs the former Beatle made famous. Special guests on the show will include singer/songwriter/educator Suzahn Fiering. Fiering recently was presented the "Honored Friend Award" from Paul McCartney himself for her contributions to the Liverpool School for the Performing Arts. The band will make its grand entrance from the "Big Love Bus", which will circle around the street and pull up to the venue's entrance at 3:45 p.m. Radio stations Mix 92.9 and 96.3 Jack-FM will provide live coverage. Show attendees (and hopefully Sir Paul) will also be treated to a "big surprise" on the Arena steps.

It will be the second time The WannaBeatles have honored The Beatles by performing on Rippy's Roof. On Jan. 30, 2009, the band delighted fans and onlookers (even the mayor) by commemorating the 40th anniversary of the Fab Four's legendary rooftop performance in London. The "Welcome Back, Paul" party and concert will get fans in the mood as they enter Bridgetone Arena to hear the McCartney himself.

"Even a wave from Paul would be exciting,” noted band keyboardist Nathan Burbank. "The closest we’ve come yet to meeting him was at the Grammys and our own 'We Wanna Meet Paul' video."

The band has reached new career heights since then, releasing a song and video honoring Betty White (who beat them out for a Grammy); recording their first album of original Beatlesque songs titled "We're Still Rockin'"; joining 19 fellow Beatles tribute bands from around the world for a 50th anniversary tribute video for the Fab Four's first hit, "From Me To You"; and appearing on the Fox News "Huckabee" show with host Mike Huckabee, who deemed them to be “the ultimate Beatles tribute band”. But no matter where they go, fans still ask the same question: “So, have you met Paul yet?”

To which drummer David Toledo added, “We just want what every Beatles fan wants – to thank Paul for the music that changed our lives”.

The WannaBeatles' "We Wanna Meet Paul" video has been viewed approximately 20,000 times. It features the band performing its Paul tribute song at various Nashville landmarks, including the Union Station Hotel.  Scenes include an "Abbey Road"-inspired stroll across a painted crosswalk and a fan-crazed chase after a London town car containing a cardboard cutout of Paul McCartney.

The lyrics to their upbeat tune humbly states “... to shake his hand is all we want to do. And say thanks to Sir Paul."

"That may sound like a lot to ask," Scott added. "But when you’re a Beatles fan, anything is possible."

To learn more about The WannaBeatles or the "Welcome Back, Paul" party and concert, visit www.TheWannaBeatles.com or send an e-mail message to Dennis@TheWannaBeatles.com. To view the video of the song, "We Wanna Meet Paul", visit http://www.youtube.com/watch?v=ddiHnVcdoLQ . To see The WannaBeatles appearance on "Huckabee", go to http://youtu.be/aZ99aDY-jDY . Follow the event at Twitter with the hashtag #welcomebackpaulparty.
Posted by Chuck Whiting at 7:58 AM