NASHVILLE, Tenn. (May 2015) – Americana/rock/pop artist Chakra Bleu chooses her guitar over a man in the humorous new video for her popular rock anthem about romance, "Love Me Like My Guitar".

The video, which was released at You Tube on May 18, shows the artist cradling her guitar while refusing to allow a pursuing love interest into her room. She dances with the love of her life, her guitar, as the disenchanted suitor begs outside the door. Viewers are treated to a tongue-in-cheek story featuring Bleu's high-energy rock vocals and moaning (but loving) guitar. When all is said and sung, a man just doesn't compare to her musical instrument.

"I loved shooting the video for 'Love Me Like My Guitar'," said Bleu, who recorded the song for her latest album, "All of Me". "My guitar is my constant, loving companion... the true love of my life. So, why not make a unique play on something that's close to my musical heart and soul?" 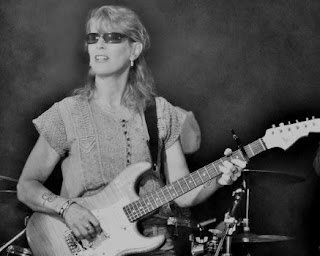 The video, which features co-star Pal Sheldon, was shot and produced by Ray Boone of Music City Video. The song features performances by veteran Nashville session players John Billings on bass, Brice Foster on drums/percussion, Tom Britt on lead and slide guitar, Ronnie Godfrey on keyboards and organ, and Dana
Robbins on saxophone. The "Love Me Like My Guitar" video can be viewed online at https://youtu.be/Pvs05GYuARc.

The "Love Me Like My Guitar" video follows the release of two singles from her latest album, "All of Me". The first single, "The Shadow", reached number one on the NMW Indie Top-40 chart, where it remained for six weeks. The title track recently hit the top 20 on NMW's Top 40 and Hot 100 charts. The Nashville, Tenn., artist co-produced the recordings with Billings, a former bass player for the late Donna Summer.

In "Love Me Like My Guitar", Bleu places certain conditions on her potential lover, singing, "I better let you know now... before you're in too deep. Don't want to get your hopes up... if you can't compete. If you're gonna love me... You need to love me like my guitar." Her infectious, rocking love song offers a sultry, sexy and humorous look at the ferocious tug-of-war between lust and wisdom.

"I describe my latest album, 'All of Me', as a savory treat of pop-rock and R&B -- sweet and sultry with a shake of sass," said Bleu. "The song 'Love Me Like My Guitar' fits well into that mold. The storyline and feel are perfect for a video, presenting clever one-liners and crying electric guitar. It was fun writing the script and casting my unfortunate love interest."

The "All of Me" album, which features "Love Me Like My Guitar" as the fourth track, is available for download on the artist's website, www.ChakraBleu.com , iTunes (https://itunes.apple.com/us/album/all-of-me/id882273855?uo=4), and all major online stores, including CD Baby, Amazon, Spotify, iHeartRadio and Sony Music Unlimited. 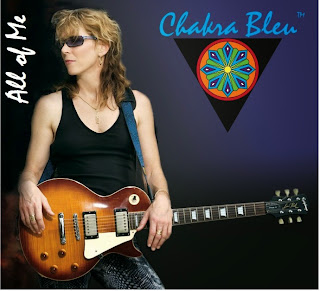 All of the songs were recorded in Nashville at Funky Tymz Studio, with Bleu on vocals and electric guitar. Music industry veteran Gary Lefkowith is overseeing radio promotion. Whiting Publicity and Promotions is handling publicity.

Bleu said there is nothing better than playing live in front of enthusiastic audiences. She has performed at a wide range of Nashville venues, even taking the honors of being the showcase artist for BMI and Bluebird Cafe shows. She is the recipient of the prestigious "Arena Award", an honor bestowed to legendary artists such as Reba McEntire, Dolly Parton, and Jo Dee Messina.

"I'm very grateful for the Internet in that it allows me to run my music business that includes my record company, 1746 Records," Bleu continued. "By working directly with distribution and manufacturing companies, I am able to reach fans across the globe simultaneously through my website and other online stores such as iTunes and Amazon."

For more information about Chakra Bleu or to hear her music, visit www.ChakraBleu.com. To book the artist for an upcoming event, send an e-mail message to 1746Records@chakrableu.com.
###
Posted by Chuck Whiting at 1:42 PM

Email ThisBlogThis!Share to TwitterShare to FacebookShare to Pinterest
Labels: 1746 Records, All of Me, Americana, Chakra Bleu, Love Me Like My Guitar, Music, Nashville Tennessee, Pop, Rock, Video, You Tube