NASHVILLE, Tenn. (May 2016) – Country artist Scott Coner and hit singer-songwriter Carol Chase have teamed up for a new single and music video of the classic Procol Harum rock classic, "Whiter Shade of Pale".

Coner, who has recorded several classic rock covers in the past, says he discovered the song in the early 1980s on the soundtrack for the movie "The Big Chill". It's been a favorite ever since.

"Procol Harum did a great job with the song," said Coner, who will include the tune on a new EP to be released this summer. "When I first started talking with Carol Chase, I wanted to begin on common ground. We hadn't begun writing together at that point, and I thought it would be good to start with a more established song. I had been considering the song already, and when I mentioned it, she loved the idea." 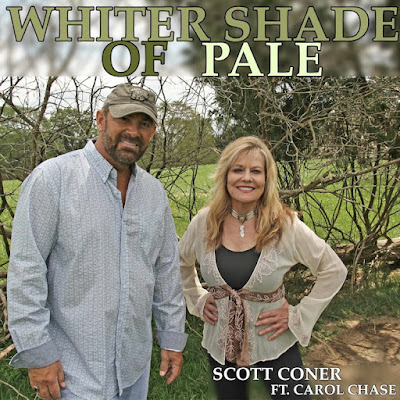 Scott's wife, Cyndi, shot the video for Cynnamae Media Productions on the Coner family farm in Nancy, Kentucky, and during a recording session at 515 Studio in Nashville. The video was themed with different transition shots using natural shades of white. She added 1960s effects at the beginning after studying the original Procol Harum video.

"We've all reviewed the video, and everyone is very happy with the results," Scott added. "I like working on our family farm because of the pretty surroundings, the seclusion, and my own memories of the farm itself. We hope people will enjoy it as much as we did while recording and filming the song."

Scott's goal for the recording was to take a new approach, while respecting the original feel and structure of the original Procol Harum hit. Listeners can still hear the signature Hammond B-3 organ licks and "Beatlesque" percussion made famous in the original.


"We kept the song at the same beats per minute," the artist continued. "My direction to the drummer was to attack it like John Bonham on a very simple, stripped-down set. As things progressed in the studio, the song went a slightly different direction with more of a pop sound. To allow for easier transition, we went with a simple bend in the guitar hook to maintain the contrast of the organ and the original direction of sound."

"Whiter Shade of Pale" follows the release of a music video for "Maybe She Lied", a hit duet featuring Scott Coner and country singing legend Tanya Tucker. The "Maybe She Lied" video has been downloaded almost 250,000 times at http://www.Facebook.com/ScottConerMusic. The song hit number one on the United Kingdom's Hot Disk Top 40. "Maybe She Lied" and other song selections can be downloaded on iTunes at https://itunes.apple.com/us/artist/scott-coner/id333235738.

Scott also has recorded with country legends T. Graham Brown and Charlie Daniels. Other songs, including "Sanibel" (a duet with Brown) and "Reedy's Dream" (with vocal and instrumental contributions from Daniels), have been heard on terrestrial and online radio stations around the world. Also an emerging author, Scott recently penned the book "Lynyrd Skynyrd: Ronnie Van Zant and Me" with Gene Odom, a survivor of the Lynyrd Skynyrd plane crash.

Posted by Chuck Whiting at 9:38 AM