The "Pouring Your Art Out" watercolor workshop will be offered to beginning, intermediate and advanced artists from March 8-10, 2019 at Plaza Artist Materials, 633 Middleton St. in downtown Nashville. Sessions will occur from 9:30 a.m.-4 p.m. on Friday and Saturday, and 8:30 a.m.-3 p.m. on Sunday.

The artist/instructor, who taught and painting in Franklin for more than 20 years, will show attendees how to create glowing watercolor paintings by pouring pigments in primary colors without the use of brushes and palette knives. The course is structured to serve artists at all skill levels, from the very raw beginner to the most advanced. McDaniel will close each session with individual critiques.

"Have you ever wanted to set your brushes aside and just have the freedom to pour your watercolor pigments across the watercolor paper?" asked McDaniel, who now teaches and paints near Griffin, Georgia, south of Atlanta. "This is a chance for artists to release that child within them."

Because space is limited to 20 participants, reservations are required. Tuition is $195 for all three days of training. Attendees are eligible to receive a 30 percent discount on the purchase of art supplies from Plaza Artist Materials. For more information or to register, contact the artist by phone at (678) 603-1502 or send an inquiry to gail@gailmcdanielart.com.
McDaniel explained that brushless watercolor paintings are achieved by using only the three primary colors. As one pours, transparent veils of watercolor pigments flow to produce glowing paintings, resulting in an exciting "finale." The paints seem to have minds of their own. As the primary triad mixes on the white paper, the paints create luminous, secondary colors that capture light.

"That is part of the magic of this special technique," McDaniel noted. "Artists won't be using brushes and palette knives. They can learn a technique that, at first glance, seems quite impossible. This fun activity allows you to work on two paintings at once, pouring one while allowing the other to dry."

McDaniel is an acclaimed watercolorist who, by invitation, has served as an associate member and demonstrating artist/instructor for the prestigious Winsor & Newton Creative Artist Network of London. She was commissioned to create four program covers for Griffin (Ga.) Choral Arts' 10th anniversary concert season. Before moving to Georgia, McDaniel spent more than 20 years working as a professional watercolorist and art instructor in Nashville and Brentwood, Tennessee. During that time, she taught more than 1,500 students in classes and workshops around the world. A number of her former students have developed into professional artists with exhibitions and commissions of their own.

"Like me, others love the look of watercolor paintings and want to learn the medium," said the artist, who painted the invitation cover for "A Little Night of Music" starring country superstar LeAnn Rimes. "Many come for the change of pace and the new, wonderful, relaxing challenge it brings. The intermediate and advanced students come to me to grow in the medium."
McDaniel will demonstrate the techniques, shortcuts and concepts that she has developed or learned by doing, reading or studying with others. She plans to show her students everything she knows, holding nothing back. Her goal is to inspire them without making them feel overwhelmed.

"Gail can get more color out of watercolor than you can imagine," said Bev Silsby, an artist/student in Albuquerque, New Mexico, who helped host McDaniel for a similar workshop in 2005. "She is literal, impressionist and abstract."

In 2002, she and her husband, Ken, launched the "Students and Friends of Gail McDaniel Awards", raising almost $90,000 for Middle Tennessee public schools. The fundraising effort earned Gail and Ken a nomination in the "volunteer innovator" category of the 2009 Mary Catherine Strobel Award. In 2012, the artist was named the PENCIL Foundation's "Volunteer of the Year".

Before leaving Tennessee, she received an award for "Excellence in Community Service" in 2010 from the Travelers Rest Chapter of the National Society of the Daughters of the American Revolution. She was inducted into the Cave City, Ky., Hall of Fame in 2011 and named to the Honorable Order of Kentucky Colonels in 1970 as one of  "Kentucky's ambassadors of good will and fellowship around the world."

In 2001, she was invited by directors of the "Art in Provence" program to conduct an eight-day watercolor workshop in Dieulefit, France. She also has taught in Central America, South America and Canada. She studied under 38 noted art instructors to help build her reputation as one of the South's top artists/instructors. -- even accepting a commission to paint a family landmark for former Kentucky Gov. Louie B. Nunn.

Gail McDaniel's artwork was featured on the program covers of four major concerts in 2016-17 performed by The Griffin (Georgia) Choral Arts group. The choir, which is led by Artistic Director Dr. Stephen J. Mulder, is celebrating its 11th anniversary season.

Posted by Chuck Whiting at 11:35 AM No comments:

'Tunesmithing' to Spotlight Five Songwriting Acts in Nashville on Jan. 19 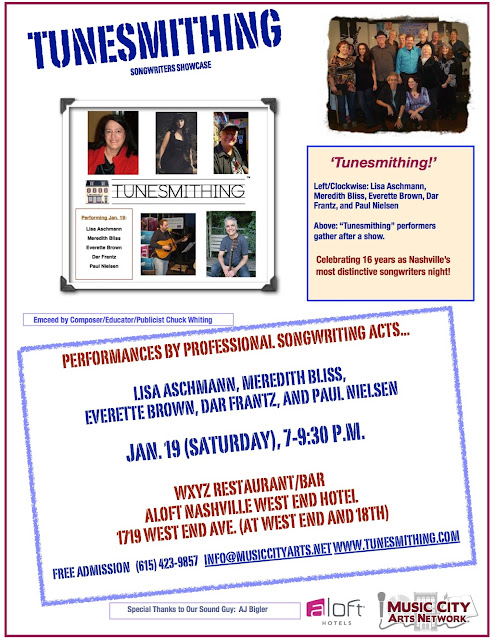 "Tunesmithing" songwriters showcase is sponsored by Music City Arts Network, Striking Moon Music, and Shine Time Music. The monthly show was founded in 2003 to spotlight emerging, professional and hit songwriters, as well as artists of all kinds. The event offers mentoring, career growth and networking opportunities for artists at all levels.


Posted by Chuck Whiting at 3:26 PM No comments: