NASHVILLE, Tenn. (February 2021) -- Author/educator Harriet Kimbro-Hamilton said she "felt like a kid at Christmas" after Major League Baseball announced it was correcting a longtime oversight in the game's history by elevating the Negro Leagues from 1920 through 1948 to major-league status.

"When the announcement from Major League Baseball came on Dec. 16, I received so many texts and calls," said Harriet, who recently celebrated the release of a new book honoring Nashville's Black baseball legends. "I felt like a kid at Christmas who was so excited about the present. What a great present to be given to all of the families of those Negro Leaguers." 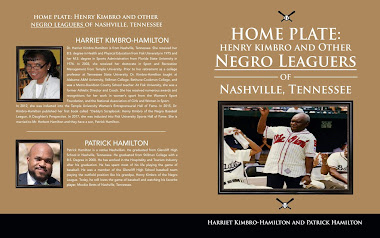 "Finally, my father and so many other Negro Leaguers who labored for the love of their sport, when half of the population in the country didn't even know they existed, was the final victory for injustice," she added. "The recent movement and recognition of this generation that stood up for the Black Lives Matter issues shined a light on the question of why injustice. This issue covered several areas of concern, and because professional sport is a venue that is highly visible in that regard, I think Major League Baseball gave the right answer to the injustice question at the right time."

The reclassification of Negro Leaguers came after "Home Plate" was released on Dec. 5. A virtual event also celebrated the 100th anniversary of the Negro Baseball League. To watch a recording of the event, visit https://youtu.be/IZhONpi7wxA.

"My goal is to first nurture a partnership with a group to see if we can get 'Home Plate' donated to every middle and high school library in the Metro-Davidson County School System," said Harriet, who recently retired as an associate professor at Tennessee State University. "This is the only book that provides the history of Negro League baseball for Nashville."

Harriet added that she and other descendants of Nashville's Black baseball heroes are organizing an educational program to honor their legacies.

According to the History Channel, the league was launched in 1920, with Black baseball enjoying periods of success in the early 1920s and again after the Great Depression. The Nashville White Sox/Nashville Elite Giants, which were members of the Southern Negro League, made history by introducing some of the greatest baseball players of all time. The integration of major league baseball began with Jackie Robinson in 1947. After that, there was a slow but irreversible influx of talent to the majors, with the remaining Negro League teams generally folding by the 1960s.

The book features a foreword by Henry Kimbro's great-granddaughter (Harriet's great-niece) Jada Scott, and a chapter titled "My Adventures with Grandpa" that documents the unforgettable experiences of Harriet's son, Patrick Hamilton. A photo in "Home Plate" shows Harriet's great-niece, Brooklyn Scruggs, visiting the street sign of Junior Gilliam Way in front of the Nashville Sounds Baseball Stadium with her dog Blossom.

The author has included a special "Scavenger Hunt" chapter to provide a free, fun and educational activity in Nashville for children of all ages. Readers can win prizes by finding three Negro League landmarks and e-mailing their photos to HenryKimbro14@gmail.com.

Dr. Harriet Kimbro-Hamilton served as an associate professor for Tennessee State University in Nashville until her retirement in 2020. During her athletic career, she served as head coach in various sports and athletic director of Fisk University. She also has served as a professor for Stillman College in Tuscaloosa, Alabama. The author also chaired the NCAA Women's Basketball Championship Committee and served on the ABA-USA Committee that selected the 1984 USA Olympic Gold Medal Women's Basketball Team. In 2016, she received the Robert Peterson Recognition Award for her book, "Daddy's Scrapbook: Henry Kimbro of the Negro Baseball League, A Daughter's Perspective." She also has received awards from the Women's Sports Foundation; the National Association of Girls and Women in Sports (the Dr. Nell C. Jackson Award); Fisk University (Women of Prominence Award); and the Temple University League for Entrepreneurial Women (Hall of Fame inductee). She was inducted into the Fisk University Sports Hall of Fame in 2017.

"Home Plate," which retails for $12, is available exclusively at www.Amazon.com. For more information, contact Harriet Kimbro-Hamilton at HenryKimbro14@gmail.com. To learn more about Nashville's important role in Negro League baseball, visit www.Facebook.com/HenryKimbro or www.Twitter.com/KimbroNlb.

Posted by Chuck Whiting at 1:53 PM No comments: