Whiting describes his first solo effort, "Dreamer On The Prowl," as a reflection of his life's work. For many years, he wrote songs with the goal of landing cuts with other artists. Now his passion is aimed more towards the arts and originality, with a focus on film and television.

"I have a love for all kinds of music," Whiting said. "For me, recording this album wasn't about trying to fit into a particular genre. It was more about being true to who I am. I hope listeners will appreciate the authenticity. At this stage of my life and career, my work is more about expressing myself and being real."

The album is available at a host of online retailers, including CD Baby and iTunes. To hear or download selections from "Dreamer On The Prowl," visit http://store.cdbaby.com/cd/chuckwhiting3 or https://itunes.apple.com/mn/album/dreamer-on-the-prowl/1324598666 . 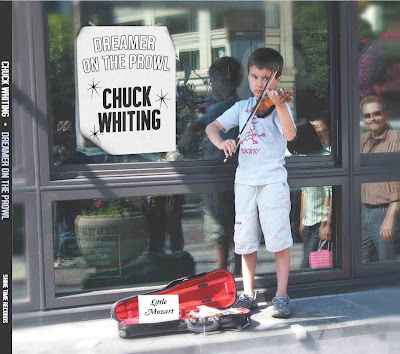 "These incredible Nashville area artists helped lift my work to a higher level than I could have done myself," Whiting added. "They totally understood what I was reaching for."

Highlights on the album include the Broadway-esque instrumental and vocal tune "Baby You're Good" (written with Candy Paull), the inspirational pop ballad "When You Have Love" (written with Lisa Aschmann), the classical instrumental "Water" (a duet with violinist Myles Thompson), a New Orleans-inspired instrumental called "Ragtimer Blues," and an "outside-the-box" jazz instrumental arrangement of "You Never Give Me Your Money" (a classic cover written by Lennon/McCartney). Max Niederle duets with Whiting on several instrumentals, including the title track.

"I couldn't record my first album without including an instrumental cover of a Beatles song," Chuck continued. "They've been with me since the very beginning."

Chuck Whiting is a songwriter, composer, pianist, singer, author, publicist and educator. He began his career as a reporter for The Mobile (Ala.) Press Register and The Birmingham (Ala.) News. He worked in the PR field after that, including a seven-year stint as the PR representative for the Opryland Hotel. He launched his own Nashville company, Music City Arts Network, in 1993. He currently serves as an instructor of Mass Communications for Motlow State Community College in Smyrna, Tennessee.