'Tunesmithing' to Celebrate Music in Film, Television and Theatre on Nov. 18

NASHVILLE -- "Tunesmithing" will celebrate music in film, television and theatre with a show from 7-9:30 p.m. Nov. 18 (Wednesday) at WXYZ Restaurant/Bar at the Aloft Nashville Hotel, 1719 West End Ave. (near Music Row). 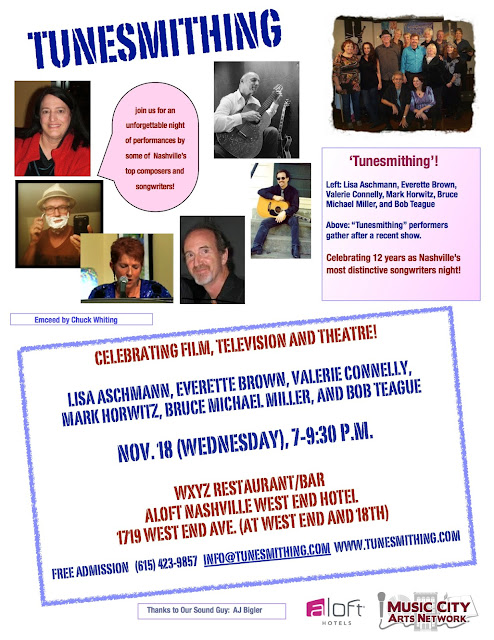 Admission is free. Food and beverages will be available for purchase. Publicist Chuck Whiting will emcee the show. Songwriter/audio engineer AJ Bigler will handle sound. "Tunesmithing" songwriters showcase is sponsored by Whiting Publicity & Promotions, Music City Arts Network, and Shine Time Records and Books. The monthly show was founded in 2003 to spotlight emerging, professional and hit songwriters, as well as artists of all kinds. The event offers mentoring, career growth and networking opportunities for artists at all levels.


Posted by Chuck Whiting at 2:30 PM No comments:

The simple, catchy, hook-oriented tune is now available at iTunes and other online retailers. Coner, who has worked with legendary artists such as T. Graham Brown, Tanya Tucker and Charlie Daniels, was joined in the studio this time by Christopher Cross's background vocalist Marcia Ramirez.

"I discovered 'Sweet Mary' in a stack of 45rpm records as a young kid in Nancy, Ky.," said Scott, who plans to release a new EP in early 2016. "My dad's little sister Janice had a small record player and a stack of music she had left behind after she got married. I spent a lot of time there as a kid, and 'Sweet Mary' kind of attached itself to me."

To download Scott Coner's "Sweet Mary" single at iTunes, visit https://geo.itunes.apple.com/us/album/sweet-mary-single/id1052955133?app=itunes. An accompanying "Sweet Mary music video can be viewed on You Tube at https://youtu.be/YTEesJ2amtA. 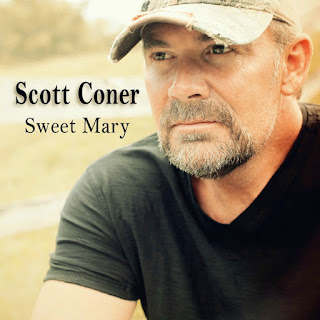 For Wadsworth Mansion, the original version of "Sweet Mary" was a "one-hit wonder". It quickly climbed into the top-10 on various charts, then essentially disappeared. Various misfortunes, including flooded equipment, forced the popular Providence, Rhode Island, rock band to break up in 1972. The legendary group was largely forgotten until a local TV feature story aired in 2014. Steve Jablecki, who penned the song, died of unknown causes in 2005.

"The song was written about a soldier in Vietnam that got a letter from his wife or girlfriend," Scott added. "She says in the letter that she 'has a stomach full of love' and he needs to get home to his family. I understand that Steve wrote it on a piano and pitched it around New York. I have been told that he actually hitchhiked from Rhode Island to New York to do the vocal cut."

To get approval for his video and single covers, Coner had to track down members of the Jablecki family. Sons Matt and Marc quickly endorsed the project, with Matt saying, "It's something dad would have been just so excited by."

Scott says he especially enjoyed singing the "doo-wops" with Ramirez, which took him back to childhood times. His wife, Cyndi, shot a music video during the session to create a playful, feel-good production for all ages. The video has been downloaded almost 150,000 times on his Facebook artist page at http://www.Facebook.com/ScottConerMusic.

"I came into the studio with a beat I wanted to start the song with," Scott continued. "I didn't want too much B-3 on the song because I wanted a bar chord rhythm. The original bass line was cool, so I didn't want to deviate too far from that. I felt like the original cut kind of tipped its hat to The Kinks both musically, as well as vocally. I wanted to carry the song away from that direction just a little with a warmer bottom and vocally change the dynamic with myself and Marcia doing the whole song."

The video opens with Scott reminiscing in his music room at home while listening to the original 45rpm Wadsworth Mansion single. It then fades into his upbeat studio performance.

Scott says he hopes the single and video will give listeners the opportunity to experience a little of the joy and excitement he had when he discovered it on his grandparents' farm as a young boy.

"I think the song was different from anything else I had been subjected to at that early stage of my life," he said. "I don't remember ever hearing it on the radio. I only heard it at the farm in Kentucky. Maybe that was the reason I loved it so much."

A self-proclaimed family man, Scott Coner lives with his wife and two daughters on rural farmland near Franklin, Ind. He has recorded songs with a who's who of country legends including Tanya Tucker, T. Graham Brown, and Charlie Daniels. Scott's single "Maybe She Lied", a duet with Tucker on Reedy's Dream Records, hit number one on the United Kingdom's Hot Disk Top 40. Other songs, including "Sanibel" (a duet with Brown) and "Reedy's Dream" (with vocal and instrumental contributions from Daniels) have been heard on terrestrial and online radio stations around the world. Also an emerging author, Scott recently penned the book "Lynyrd Skynyrd: Ronnie Van Zant and Me" with Gene Odom, a survivor of the Lynyrd Skynyrd plane crash.

To learn more about Scott Coner or to download his songs and videos, visit www.ScottConer.com.
Posted by Chuck Whiting at 9:13 PM No comments: