Coner says he was inspired to write the song on his Takamine guitar after a very good friend went home from work and found his wife gone with all of her belongings. Coner and Tucker later recorded an emotionally charged rendition of the song at CTM Studios in Nashville. The tune hit number one in the United Kingdom shortly after its release.

"My friend never saw it coming, and it shocked the daylights out of him when it happened," said Coner, who has worked with other country legends such as T. Graham Brown and Charlie Daniels. "Working with Tanya, even being in the same room with Tanya, is an honor. Her voice is stronger than anything I have ever heard, and she attacked the song like a seasoned pro. She truly is a beautiful person."

To download the "Maybe She Lied" music video, visit the artist's website at www.ScottConer.com, his Facebook artist page at www.Facebook.com/ScottConerMusic, or You Tube channel at https://youtu.be/i8cKZ0OllCo.

The "Maybe She Lied" music video reveals the heartache of a love affair gone wrong. Once together, now apart, the man and woman look back and yearn for what could have been. A crew from Cynnamae Media Productions shot the video on the Coner family farm in Nancy, Ky. The house and farm is where Scott's grandparents raised eight kids and the same place where he spent countless hours roaming the fields and thinking about his future. The video was directed by his wife, Cyndi Coner. She also appears with Scott in the video.

"Everything in the video means something to me," Coner added. "The trees that I stand by are where I used to play as a kid. The porch scene is where I sat with my grandpa and grandma on many an occasion, and the hay and tobacco barns both make an appearance. Cyndi holding an umbrella is my favorite part of the song. I love the colors and beauty she brought to everything."
Coner co-produced the song with sound engineer Logan Schlegal. A Floyd Cramer piano style was used throughout the song to help give it a classic country feel. Coner and Tucker worked with some of Music Row's top session musicians.

"Of course, Tanya Tucker did an amazing job," Coner continued. "When I left the studio after the mix, I knew we had a strong track. Mark Mosely is a friend and producer here in town that helped bring Tanya to the table. I don't think I can ever thank him enough for that."

Scott Coner has recorded songs with a who's who of country legends including Tanya Tucker, T. Graham Brown, and Charlie Daniels. Scott's single "Maybe She Lied", a duet with Tucker on Reedy's Dream Records, hit number one on the United Kingdom's Hot Disk Top 40. Other songs, including "Sanibel" (a duet with Brown) and "Reedy's Dream" (with vocal and instrumental contributions from Daniels) have been heard on terrestrial and online radio stations around the world. Also an emerging author, Scott recently penned the book "Lynyrd Skynyrd: Ronnie Van Zant and Me" with Gene Odom, a survivor of the Lynyrd Skynyrd plane crash.

To learn more about Scott Coner or to download his songs and videos, visit www.ScottConer.com, www.Facebook.com/ScottConerMusic, or www.YouTube.com/user/ScottConer. Follow Coner at www.Twitter.com/ScottConer. "Maybe She Lied" and other song selections can be downloaded on iTunes at https://itunes.apple.com/us/artist/scott-coner/id333235738.

'Tunesmithing' to Celebrate the Season on Dec. 16 With Special Holiday Show

NASHVILLE -- "Tunesmithing" will celebrate the season with a special holiday show from 7-9:30 p.m. Dec. 16 (Wednesday) at WXYZ Restaurant/Bar at the Aloft Nashville Hotel, 1719 West End Ave. (near Music Row).

The monthly show was founded in 2003 to spotlight emerging, professional and hit songwriters, as well as artists of all kinds. The event offers mentoring, career growth and networking opportunities for artists at all levels. 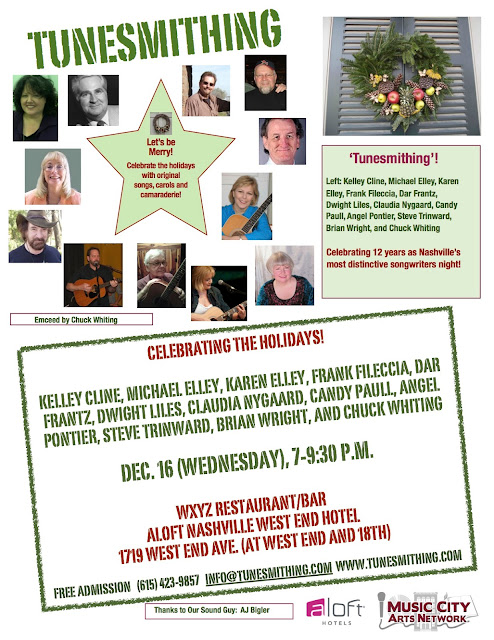 Posted by Chuck Whiting at 2:04 PM No comments:

ATLANTA, Ga. (December 2015) -- Gail McDaniel, an acclaimed watercolorist who has served as an associate member and demonstrating artist/instructor for the prestigious Winsor & Newton Creative Artist Network in London, will celebrate 2016 by teaching an eight-week watercolor painting course near Atlanta.

The watercolor painting course will be offered to beginning, intermediate and advanced artists on Wednesday afternoons starting Jan. 6 at Griffin First United Methodist Church, 1401 Maple Drive in the Atlanta suburb of Griffin, Ga. Sessions will occur from 1-4 p.m. on Jan. 6, 13, 20 and 27; and Feb. 3, 10, 17 and 24. Tuition is $165 for all eight, three-hour sessions.

The artist/instructor will provide insights on composition, perspective, value, color theory and application. She also will demonstrate some of the techniques that have helped make her an award-winning artist, including abstract under paintings, disappearing purples, painting on Masa Paper, white on white, monotype paintings, let it flow, texturize your paintings, portraits, reflective surfaces, and wax-resist Batik. The course is structured to serve artists at all skill levels, from the very raw beginner to the most advanced. McDaniel will close each session with individual critiques.

Because space is limited for the classes, reservations are required. Payments by check are accepted. For more information or to register, contact the artist by phone at (678) 603-1502 or send an inquiry to gail@gailmcdanielart.com. Individuals can learn more about the artist/instructor and view her artwork at http://www.GailMcDanielArt.com.

Before moving to Georgia, McDaniel spent more than 20 years working as a professional watercolorist and art instructor in Franklin, Tenn. During that time, she taught more than 1,300 students in classes and workshops around the world. A number of her former students have developed into professional artists with exhibitions and commissions.

Over the years, McDaniel has seen the positive change that comes over many people when they spend three hours with her creatively thinking from the right side of their brain.

In 2002, she and her husband, Ken, launched the "Students and Friends of Gail McDaniel Awards", raising almost $90,000 for the visual arts in Middle Tennessee public schools. The fundraising effort earned Gail and Ken a nomination in the "volunteer innovator" category of the 2009 Mary Catherine Strobel Award. In 2012, the artist was named the PENCIL Foundation's "Volunteer of the Year".

Posted by Chuck Whiting at 1:30 PM No comments: