AUSTIN, Texas (November 2013) – Americana/Roots singer-songwriter Chris Beall will celebrate the release of his second solo CD, "The Gin Mill Hymns", with a special concert in Austin, Texas, on Nov. 7.

Beall self-produced the roots rock-oriented “The Gin Mill Hymns” and wrote five of the nine tracks. His musical style is often compared to artists such as Tom Petty, while his lyrics brim with Springsteen-like storytelling sensibility. The album, which is being distributed by Gin Mill Records, is now available at iTunes, Amazon, and other online music retailers. 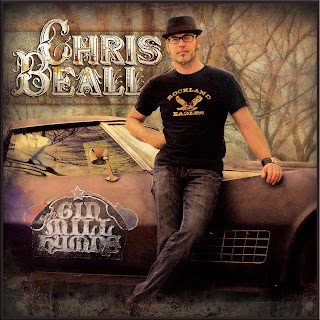 “This album is me being comfortable with all these different facets of the Americana genre -- even the songwriting,” said Beall, whose album is airing on Americana-formatted radio stations across the nation. “With any human being, there are certain things we give up and certain ones we hold onto. There are times in our lives where maybe we traded something that we should have held onto. Later, we realize what the cost really was.”

The artist's imagery-filled musical stories "fit back together" music and family, creativity and making a living, life and religion, and whiskey and church. Beall says that he enjoys the juxtaposition of putting two unlike things together and creating beauty out of it. For example, gin mills are a slang term for bars, while hymns are sacred songs.

“I go after authenticity," he added. "In my stuff, most of the time you hear ideas that are accessible, approachable and authentic. I think part of what makes anything beautiful is the combination of the limitation and the accomplishment. The juxtaposition, side by side, makes it work. Part of the reality and the real beauty is lost in the quest to be perfect.”

“The Gin Mill Hymns” is a deeply personal album, with songs such as “Half a World Away” illustrating defining moments in the artist’s life. Beall says he started out writing the song thinking about people that were far away from him. By the time he sat down to write the second verse, the song broadened into a way to express feelings about his brother’s death from cancer.

“I think in analogies and am always processing something," noted the artist, who restored and sold a 1970s Corvette Stingray to finance the project. "I can’t remember a time when I didn't do that. If I’m not wandering or processing or asking some type of question, I’m not healthy.”

Beall is the son of a retired motorcycle racer from a small town in West Texas. He writes about his father’s career-ending crash and miraculous recovery in the song “Dug Down Deep”. The story resonated with him throughout life, but he finally decided to put it all on paper after his fellow songwriter friend Rodney Black moved away. He admits that the first section of the song was actually written about his friend and feeling stuck. As he wrote, there was a nagging feeling that a bigger story needed to be told, and that led to writing about the motorcycle accident.

“Chris is the quintessential independent artist," Jean said. "I would probably go as far as to say that he is the poster child for the new ‘alternative music industry’ that has developed.”

“The Gin Mill Hymns” was engineered, mixed and produced by Beall. The multi-talented artist is featured on lead vocals; acoustic, electric, and baritone guitars; mandolin, banjo, and resonator. Rodney Black co-wrote several songs and is featured on electric and acoustic guitars, as well as lap steel. Scott Roberts plays electric and stand-up bass, while Gray LeGere can be heard on drums, percussion and background vocals.

Beall’s artistic journey began as a child growing up in Abilene, and he says music has always been a part of his life. At 6 years old, he was picking out four-part choral pieces to sing in church and recalls singing Air Supply songs with his mother as they drove around in their ‘70s station wagon. He began playing the guitar after he broke his ankle in a 1986 national championship BMX race. His two half brothers played the guitar and helped teach him chords.

He began playing professionally for regional acts in the ‘90s. In 1996, he moved to Nashville, Tenn., where he produced independent artists and signed a development deal with Millennium Records. By 2000, he was back in Austin working as a sound system designer and recording engineer, collaborating with artists such as Citizen Cope, Augustana, and Aqualung.

Beall made the decision to pursue a career as a singer-songwriter in 2008. He released his first folk-oriented solo CD, “Brand New World”, two years later and toured China as part of the Austin Sound Exchange.

Beall’s second release, “The Gin Mill Hymns”, is distributed by Gin Mill Records in Austin and available at online music retailers, including Amazon and iTunes. Upcoming promotional activities include a television appearance on “Songwriters Across Texas.” The project is being promoted to radio nationally by Nashville-based Bill Wence Promotions. The artist is represented by LeGere Productions and Whiting Publicity & Promotions.

He will celebrate the album's release with a special concert from 7-10 p.m. Nov. 7 (Thursday) at Threadgill's, 201 W. Riverside Drive in Austin. Admission is free.

To learn more about Chris Beall or his new album, “The Gin Mill Hymns,” call (512) 293-6705, send an e-mail message to beallstreet71@gmail.com, or visit http://chrisbeallmusic.com or http://www.reverbnation.com/chrisbeall.