NASHVILLE -- Video Game Composer and Audio Producer Alexander Brandon will provide insights on composing music for video games during the Nashville Composers Association's annual Score-Com Symposium from June 17-18 in Nashville.
"Game Music Bootcamp" is expected to draw 50 emerging and professional composers to Ocean Way Studios on Music Row for two full days of game music training. Attendees will learn aspects including non-linear scoring, integration, writing techniques, and working with supervisors. Writing session demonstrations will feature Steinberg's Nuendo with practical techniques that can be used for any digital audio workstation such as Pro Tools, Logic and Reaper. 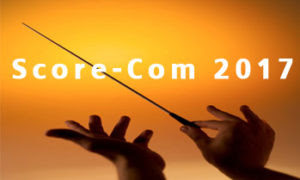 All Score-Com symposium attendees will be invited to attend a Film-Com film and television conference networking event on Saturday night. A free Film-Com laminate will provide access to a Film-Com VIP Kick-off Reception, business panels, and the annual Film and Television Industry Gala.

"We are thrilled to have Alexander Brandon as our workshop leader for our first 'Game Music Bootcamp,'" said Geoff Koch, president of the Nashville Composers Association. "He is a game audio veteran with 20 years of experience and more than 50 titles to his credit, among them for hits such as 'Unreal' and 'Deus Ex.' He runs the audio production house Funky Rustic in Georgetown, Texas."

Tuition for Score-Com's two-day "Game Music Bootcamp" symposium is $55 for NCA members and $85 for non-members. Individuals must register by June 7 to receive a free Film-Com conference laminate. Ocean Way Studios is located at 1200 17th Avenue South.

To register, visit http://www.nashvillecomposers.org/product/score-com-2017/. To learn more about the Nashville Composers Association, visit http://www.NashvilleComposers.org.
The symposium will occur from 10 a.m.-5:30 p.m. on Saturday and Sunday. Saturday's schedule will include a brief history of game audio, an overview of the industry, an overview of toolsets, demonstrations of non-linear composition (vertical and horizontal), and typical industry points. Sunday's highlights include integration in Wwise, use of Wwise and Nuendo, integrations in Unreal and Unity, and licensing and networking.

Brandon is a game audio veteran with 20 years of experience and over 50 titles to his credit, among them the soundtracks for such hits as “Unreal” and “Deus Ex,” and more recently music, sound and voice for such games as “Torment: Tides of Numenera,” “Wasteland 2,” “Alpha Protocol,” the “Neverwinter Nights” series, “Bejeweled 3,” “Skyrim,” and “DC Universe Online.”
He has skills in music composition, sound design, voice acting, voice direction, audio direction, and game audio technology. He has written the award-winning book “Audio For Games: Planning, Process and Production” and written columns for Game Developer and Mix magazines. He has also lectured at UCLA Extension, Texas State University, and Berklee School of Music.
He has also worked with Hollywood voice talent, symphony orchestras, and high-profile music acts such as BT. Brandon continues to write on numerous game audio subjects, and is always honoring his roots, interviewing such Japanese game music rock stars like Hip Tanaka and Tetsuya Mizuguchi. As part of the game audio community he has served on the steering committee of the IA-SIG and as vice president of the Game Audio Network Guild.
He now runs the audio production house in Georgetown, Texas, “Funky Rustic”, with his wife, Jeanette, and distributes music through Bandcamp and Soundrop, releasing an album every now and again.
Posted by Chuck Whiting at 11:11 AM No comments: