ATLANTA (July 2019) -- Gail McDaniel, an acclaimed watercolorist who, by invitation, has served as an associate member and demonstrating artist/instructor for the prestigious Winsor & Newton Creative Artist Network of London, will lead a watercolor painting course this summer near Atlanta.

The artist/instructor will provide insights on composition, value, color theory and application. She also will demonstrate some of the techniques that have helped make her an award-winning artist, including abstract under paintings, disappearing purples, painting on Masa Paper, white on white, monotype paintings, let it flow, texturize your paintings, portraits, reflective surfaces, and wax-resist Batik. The course is structured to serve artists of all skill levels, from the very raw beginner to the most advanced. McDaniel will close each session with individual critiques.


McDaniel recently learned that Emilie Tingle, one of her Griffin students, has been juried into the July 2019 "Peachtree City Library Art Initiative." Tingle's selection was especially remarkable because her painting was judged against two-dimensional artworks in all mediums.

"This is all the more outstanding when you remember watercolor being the most challenging and specialized medium," McDaniel noted.

McDaniel was commissioned to create four program covers for Griffin Choral Arts' 10th anniversary concert season. Before moving to Georgia, she spent more than 20 years working as a professional watercolorist and art instructor in Nashville and Brentwood, Tenn. During that time, she taught more than 1,500 students in classes and workshops around the world. A number of her former students have developed into professional artists with exhibitions and commissions.


Over the years, McDaniel has seen the positive change that comes over many people when they spend three hours with her, creatively thinking from the right side of their brain.

A good example is Phyllis Tatum, a watercolorist who studied with McDaniel for 14 years in Middle Tennessee. She and her fellow students were thrilled when she won four blue ribbons and a red ribbon at the Tennessee State Fair. Her crowning achievement came later when she won the fair's "Best of Show", a rare occurrence in watercolor circles.

McDaniel fondly remembers receiving a thank you note from former student Suzy Foy of Boulder, Colo., who wrote, "My whole life I have dreamt about being an artist... I never believed I could live that dream, one painting at a time. Because of my nine workshops, mentoring and support (from McDaniel), it is happening."

In 2002, she and her husband, Ken, launched the "Students and Friends of Gail McDaniel Awards", raising almost $90,000 for Middle Tennessee public schools. The fundraising effort earned Gail and Ken a nomination in the "volunteer innovator" category of the 2009 Mary Catherine Strobel Award. In 2012, the artist was named the PENCIL Foundation's "Volunteer of the Year".

Before leaving Tennessee, she received an award for "Excellence in Community Service" in 2010 from the Travelers Rest Chapter of the National Society of the Daughters of the American Revolution. She was inducted into the Cave City, Ky., Hall of Fame in 2011 and named to the Honorable Order of Kentucky Colonels in 1970 as one of  "Kentucky's ambassadors of good will and fellowship around the world."

In 2001, she was invited by directors of the "Art in Provence" program to conduct an eight-day watercolor workshop in Dieulefit, France. She also has taught in Central America, South America, and Canada. She studied under 38 noted art instructors to help build her reputation as one of the South's top artists/instructors. -- even accepting a commission to paint a family landmark for former Kentucky Gov. Louie B. Nunn.

Gail McDaniel's artwork was featured on the program covers of four major concerts in 2016-17 performed by The Griffin Choral Arts group. The choir, which is led by Artistic Director Dr. Stephen J. Mulder, is celebrating its 12th anniversary season.

For more information about Gail McDaniel or to see her work, visit www.GailMcDanielArt.com.
Posted by Chuck Whiting at 8:56 AM No comments:

NASHVILLE, Tenn. (July 2019) -- The L.A. Party Dolls will bring their multi-media retro tribute show "GIRLPOWER!" to Nashville for the first time with a matinee show and an evening show on Aug. 17 (Saturday) at World Music Nashville.

The trio, which includes award-winning Nashville singer-songwriter Laura Powers, will present the hit songs and fun culture of Motown-era '60s girl-groups with big hair, sequined costumes, classic choreography, three-part harmony, and comedic interplay. Audiences can sing along as the Dolls perform classics by legendary acts such as the Crystals, Martha Reeves and the Vandellas, Supremes, Ronettes, and Aretha Franklin.

"We've wanted to bring our show to Nashville for many years, and now our dream has finally come true," said Powers, who has received several awards for the use of her music in film and television, including Nashville Public Television.

Show times are 2 p.m. and 7 p.m. Admission is $25 for VIP seating (first three rows with chilled water) and $20 for general seating. Matinee discounts are available for groups of six or more and children age 16 and under. World Music Nashville is located in the Bellevue Valley Plaza at 7069 U.S. 70 S. in Bellevue. Parking is free. Individuals can learn more or buy tickets by visiting www.lapartydolls.us.

Powers started the L.A. Party Dolls when she lived in Los Angeles. The group has performed extensively on the West Coast and in major casinos in Las Vegas and Reno. The trio features Michelle Giacopuzzi, a bashful blonde seeking more confidence; Rosanne Limeres, a redheaded, feisty Jersey girl; and Laura Powers, a smart-allecky companion who dons a black beehive hairdo.

Video of the L.A. Party Dolls (Provided by Laura Powers)

The trio's Nashville performance will include the classic hits “My Boyfriend’s Back," “These Boots Are Made For Walking," "Da Do Ron Ron," “To Sir With Love" “He’s a Rebel,” “It’s My Party," “Dancing in the Street," "Respect," and "Stop in the Name of Love."

Posted by Chuck Whiting at 2:28 PM No comments: 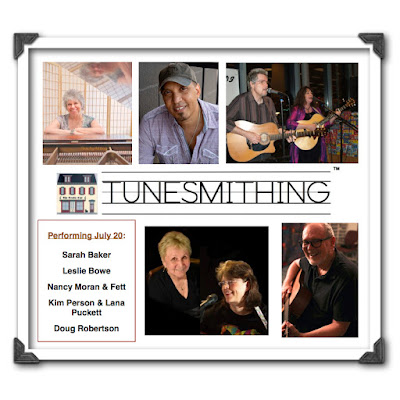 "Tunesmithing" songwriters showcase is sponsored by Music City Arts Network, Striking Moon Music, and Shine Time Music. The monthly show was founded in 2003 to spotlight emerging, professional and hit songwriters, as well as artists of all kinds. The event offers mentoring, career growth and networking opportunities for artists at all levels.

Posted by Chuck Whiting at 12:02 PM No comments: