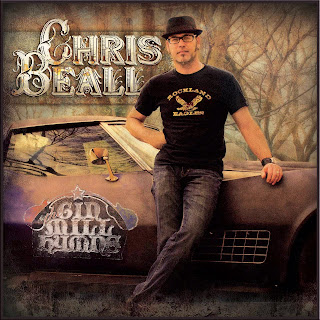 “The Gin Mill Hymns” is the sound of an artist who’s gathered a vast amount of life experiences and woven it into a tapestry of songs that reflect his artistic influences. Chris Beall’s second album is roots-rock oriented with influential nods to Tom Petty, Paul McCartney, and the storytelling style of Bruce Springsteen.
It’s the kind of album that begs to be played on a road trip down life’s highways. I’ve lived with it a few months now, and can honestly say it hasn’t left my car. “The Gin Mill Hymns” creates a folksy, introspective mood during the first few notes of “Half a World Away.” It’s a song that has a way of taking you back in time to bittersweet experiences that have long since passed. It sounds like someone saying, “I wish you well, but I’m moving on, and I’m doing it the best way I know how.” It brings on a melancholy feeling that is both reflective of the past but looks forward in hope.


Next, Beall gets autobiographical in “Dug Down Deep,” hands down the standout track in this collection. Years from now, Beall might even look back to the recording as the seminal moment when his true artistic statement began. He would do well to continue exploring the art of telling stories for the next album. Beall’s artistry comes out in the way he writes songs. He writes from a “me” perspective and then widens out to reflect a larger experience.


Chris says the story of his father’s motorcycle accident was always in the back of his mind, begging to be told in the form of a song. “Dug Down Deep” tells the tale of the artist chasing his own dreams, stepping out on faith after his musical partner and best friend moved away. By the second verse, he’s singing about “the motorcycle man” who married a flower child. His big dreamer of a father miraculously recovered from the accident, and Chris is saying that because of this thread of overcoming, he can get through his difficulties by digging down deep and pressing on.


By now, we can sense a theme of letting go of the past and overcoming the things that once stood in the way. “Make a Livin’” is another highlight that takes inspiration from the working man who leaves his family to go to work. The narrator of the song says “I have tried to see the good in it but I guess I just don’t understand.” The theme of trying to make sense of the past creeps up again. The music sets a fine groove throughout the album, but don’t let that fool you -- there’s a lot going on in the lyrics found in “The Gin Mill Hymns.”


Later in the album, Beall reflects on “Summer Days” and a girl named “Laura Lynn”, but his cover of an old blues tune called “Spike Driver Blues” proves to be most interesting. The Mississippi John Hurt folk song was rediscovered in the ‘60s and finds an appropriate home on the album. It fits in perfectly with the working class themes. It’s easy to imagine the character in “Make a Livin” sweating in the sun, and he may have hummed the “Spike Driver Blues” to get through the ordeal. The song references John Henry, a classic folk hero that hammered himself to death on the job. Beall sings “John Henry left his hammer all over these rails…” but asserts, “It was the hammer that killed John Henry but it won’t kill me.”


“The Gin Mill Hymns” is a treat to listen to and belongs in your car stereo on a road trip or as the soundtrack on the way to work. The album, every so subtly, makes a Zen-like statement that we must acknowledge the past but not live in it. One thing is for sure, there’s only a bright future in store with Chris Beall at the musical wheel!
Learn more about (or listen to songs from) Chris Beall's "The Gin Mill Hymns" at http://www.ChrisBeallMusic.com .