The WannaBeatles to Perform on 'Huckabee' Show in New York on Feb. 1

NASHVILLE - The WannaBeatles, the world’s only Grammy-nominated Beatles tribute band, will travel to New York City to make their national television debut when they appear on “ Huckabee” on Fox News Channel on Saturday, Feb. 1 at 8 p.m. ET.
The award-winning songwriters/musicians will help celebrate the highly anticipated and publicized 50th Anniversary of the Beatles first performance on American soil ("The Ed Sullivan Show") by playing a medley of Beatles classics as well as debuting their self-proclaimed Beatles fan anthem “Because They Were Fab.” Gov. Huckabee will sit in with The WannaBeatles on bass as the “Fifth WannaBeatle.”
Straight from their first national television performance, the high energy musical tribute band will make their Big Apple debut, bringing their uniquely energetic live show of Beatles classics and their own original Beatle-esque songs to New York City’s famed The Cutting Room (44 E. 32nd St.). For tickets ($15 advance / $20 at door) click HERE or go to the venue's website at http://tickets.thecuttingroomnyc.com or call (212) 691-1900. 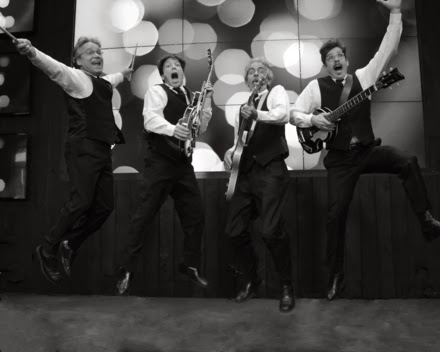 The WannaBeatles, who use their multi-instrumental skills to recreate the sights and sounds associated with BeatleMania, will be headlining Nashville’s own gala celebration of the Beatles 50th Anniversary on Feb. 9 at Barlines in the new Omni Hotel in downtown Nashville. The special celebration is from 5 -9 p.m. and free and open to the public. The event is sponsored by Nashville’s own WHPY 94.5 (Hippie Radio). A live webcast of the concert begins at 7 p.m. CT on HippieRadio945.com. The WannaBeatles will recreate moments from "The Ed Sullivan Show" with their unique live-to-film sequence. Footage from "The Ed Sullivan Show" will be shown, and a menu consisting of Liverpool flavored dishes will be available.
Hippie Radio has added "In '63", their nostalgic original song that depicts the times in which the Beatles got their start, to their playlist.
In 2012, The WannaBeatles (Dennis Scott, David Toledo, Nathan Burbank, Bryan Cumming) were nominated for a Grammy (Spoken Word category) for their album "Fab Fan Memories - The Beatles Bond". Louise Harrison (George’s big sister) hosts over an hour of interviews and commentary in this unique forum of Beatles fans from across the globe. Featuring guest appearances by Janis Ian, Phil Keaggy, Nancy Lee Andrews, Melissa Manchester, Ken Mansfield, Alan Menken, Wesley Orbison, Bruce Spizer, Billy Swan and devoted fans.
Learn more about The WannaBeatles at http://www.TheWannaBeatles.com .
Posted by Chuck Whiting at 8:23 AM