High on the mercy and love from the “Mercyland’ show, I walked across town to catch Bruce Hornsby.  I was seated at a table with two other baby boomer gentlemen who had come alone.  We were a little perplexed as the stage was set for Hornsby’s show. Where is the piano!  What are all the dulcimers and the washboard doing up there?  We soon found out as Bruce and the Noise Makers took the stage.

Hornsby played dulcimer (there were three with different tunings) holding it upright in his lap.  Next to him sat the percussionist/washboard player extraordinaire, followed by the mandolin/fiddle player.  Behind them were the drum kit, which the percussionist used on a couple of songs, electric bassist, and the electric guitarist.  Form the first chords of “New Chair”, the sound was unmistakable Hornsby!  The rhythm patterns of Bruce strumming the dulcimers to the familiar Hornsby fills carried by the mandolin/fiddle player... the sound was all Bruce!   The man next to me commented that Bruce was beginning to look like FDR. Laughing, I told him he was right. 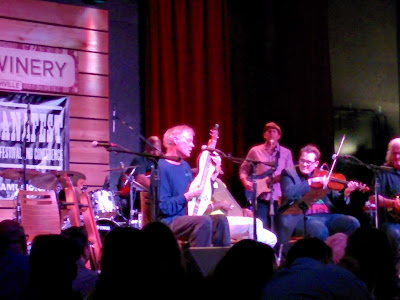 I loved the Celtic arrangement of “Black Rats of London” and “M.I.A. in MIAMI”.  “Soon Enough” had me swaying and smiling.  Ricky Skaggs joined the band, playing mandolin for the rest of the set beginning with “Rehab Reunion”...  followed by the  fun “Who Do You Love”, the exquisite “Valley Road, and the classic “Pretty Polly”.  After Ricky entered, I leaned over to the guy next to me and said, “We not only have FDR, but now we have Ben Franklin”.  We all had a good laugh.

So what if I only got four hours of sleep that night!  This show was well worth sleep deprivation. The melodies are still running though my head carrying me through the day.
Posted by Chuck Whiting at 9:16 AM