Alison Brown to Celebrate Release of New Album 'The Song of the Banjo' on Oct. 7

NASHVILLE -- With her new album, "The Song of the Banjo" (officially out Oct. 9 on Compass Records), GRAMMY Award-winning musician-composer-producer-entrepreneur Alison Brown plants another flag in her ongoing journey of sonic exploration.

Alison Brown will perform at the City Winery on Oct. 7. Tickets, which range from $15 and $25, are available by calling (615) 324-1010. Along with her Compass Records co-founder, husband, bassist and co-producer Garry West, Brown has assembled an all-star cast for the album including Indigo Girls, Keb’ Mo’, Colin Hay, ukulele virtuoso Jake Shimabukuro, as well as some of acoustic music’s most adventurous session players, including legendary drummer Steve Gadd, fiddler Stuart Duncan, Dobro player Rob Ickes, upright bassist Todd Phillips and, on guitar and bouzouki, Irish phenom John Doyle.

Of the 12 tracks on "The Song of the Banjo", seven are Brown originals, including the melodic, pop-flavored title piece that opens the set, as well the gravity-defying piano/banjo duet, “Musette for the Last Fret.” Then there are her trademark compositions written in Cinemascope - grandly sweeping melodies like “Long Time Gone” and the Celtic-tinged "Airish." "The Moon in Molly’s Eyes" brings in bossa nova, with lush strings by Andrea Zonn. “Stuff Happens,” written by Brown and West, turned into an accidental tribute to Gadd’s old band of studio aces, Stuff, which set the bar for ‘70s pop-funk-jazz fusion. 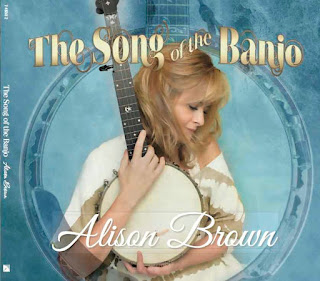 Brown’s choices for cover songs are even more surprising, from her bouncy take on Orleans’ soft-rocker “Dance With Me” to Cyndi Lauper’s hauntingly beautiful “Time After Time” to 1980’s instrumental chart-topper Chuck Mangione’s “Feel So Good,” featuring Shimabukuro’s tenor uke and the drumming of Gadd, a boyhood friend of Mangione. In Brown’s masterful hands, all three sound as if they were written for the banjo. “Time After Time” is particularly stunning. “It just lays out so beautifully on the banjo,” she says, “and I figure if it was good enough for Miles Davis, it’s good enough for me.” Brown’s unique cover versions work two very different kinds of magic, revitalizing these rock and pop classics while stripping away stereotypes of what a banjo can or can’t do. “Familiar music allows folks to understand an instrument that they may not be overly familiar with. The banjo is complex, with melodic ideas normally surrounded by rapid fire arpeggiated chords, but when you play a familiar tune it allows the audience to more clearly hear the voice of the instrument, and to understand how the playing style is integrated into, and around, the melody.”

Brown and West keep those surprises coming, as Colin Hay wryly sings Dionne Warwick’s 1970 Bacharach/David hit, “I’ll Never Fall in Love Again” accompanied by Brown on her custom-built wooden banjola. Keb’ Mo’s Americana-soul version of Marvin Gaye’s seminal “What’s Going On” is another unexpected pleasure. The bonus track, recorded after the album was finished and rush-released as a free-standing single, will be available on the CD’s Deluxe Edition. Along with Keb’s warm vocals, the song features instrumental sparks between Duncan and Brown, as well as an explosive piano solo by Joe Davidian. But it’s Brown’s understated backup and exploratory solo on low banjo that quietly steals the show.

For those who came of age in the ‘70s and ‘80s, Brown’s re-invention of these familiar songs makes them sound brand new. For younger listeners hearing them for the first time, her versions may well set the new standard. That’s all part of the alternative banjo universe that Alison Brown occupies so beautifully on "The Song of the Banjo:, reaching into the past as she looks to the future, creating an album for people who didn’t know how much they liked the banjo, while giving banjo fans new reasons to love the instrument.

“It’s amazing to me how much the banjo changed in the 20th Century,” Brown says. “And here we are in the dawn of the 21st; who knows where it may go?”
For one answer to that question, look no further than The Song of the Banjo.

To learn more about the CD and Brown's new CD, visit http://www.CompassRecords.com.
Posted by Chuck Whiting at 12:19 PM