In related news, Powers has added a new feature. The artist has designed matching color inserts to help accentuate the color of gems displayed on her pendants. 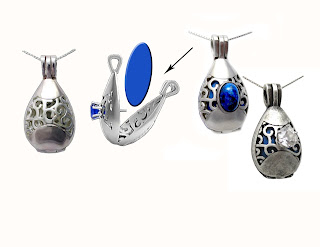 Powers officially launched her Earring Renaissance product line in August with a month-long fundraising campaign on Indiegogo. She spent more than two years developing an easy-change pendant system for those women who have lost post-style earrings and just have the one earring left. The silver and gold pendants, which easily open and close, are specially designed to securely display and hold small jewelry keepsakes.

An accompanying contest giveaway called "Pin (Share) It To Win It" allows potential buyers and/or investors to win a free necklace pendant and chain of their choice by sharing personal stories and product information on the company's social networking pages. To learn more about pre-ordering Earring Renaissance limited-edition pendants or entering the giveaway, visit http://igg.me/at/earringren .

"My Earring Renaissance product line essentially gives treasured jewelry new life," said Powers, whose oil paintings have been exhibited and commissioned around the world. "I created my pendant system because I wanted a solution to the lonely earring problem -- a problem I know all too well. Like many others, I have a jewelry box tucked away with unpaired earrings and long-forgotten pins."

Powers said she came up with the idea for Earring Renaissance after buying a pair of red coral and sterling dangle earrings, then losing one of them at work on the first day. A couple years later, the same thing happened with a pair of small opal earrings. At that moment, she dropped everything she was doing and started working on a solution for people with similar experiences.

Development of the Earring Renaissance product line has also been a way for Powers to honor her mother, who died unexpectedly of cancer in 2009. One of the unpaired earrings in her jewelry box was a diamond stud earring that her mother had given to her for her college graduation. Now, for the first time, she can reconnect to the earring and her mother's memory by wearing the diamond stud as a necklace.

"We've also found that other heirloom pieces such as a father's tie pin or a grandmother's sorority pin also work beautifully in these pendants," Powers added. "I'm excited and delighted to be able to offer something that solves a problem while helping people reconnect to their pasts and to their loved ones."

For her first Earring Renaissance product launch, Powers is offering four types of custom-made pendants: antique silver, classic silver, antique gold, and classic gold. Pendants feature a unique filigree pattern for the easy insertion of earring studs and pins. Because the front design is different than the back design, each pendant allows the user to have two different looks.

"To insert a stud earring or lapel-type pin, all someone needs to do is open the pendant at the top, position the jewelry item in the center, insert the stud, place the earring back onto the post, and reclose the pendant," Powers continued. "Each hinged pendant has a bail at the top that can easily attach to a gold or silver chain. You are ready to showcase your family heirloom in less than a minute, with no modifications to the original earring or pin needed. This will help give amethysts, diamonds, cameos, sapphires, turquoise and other precious gems and family heirlooms new life as a unique pendant."

Like other entrepreneurs, Powers is looking for investors to help her underwrite the high cost of a professional product launch. She has assembled a team of experts to help organize and promote a fundraising campaign at Indiegogo. The campaign will continue through Sept. 5, with investors receiving a range of perks from product discounts and two Giclée paintings to a fully produced family video. Donation levels range from $10 to $2,800 with a fundraising goal of $6,000. Her silver and gold pendants retail for $62 and $70, respectively. Customers and investors will receive their product orders by Dec. 1, 2015. To pre-order a pendant or participate in the campaign, visit http://igg.me/at/earringren.

Earrings, pins and other jewelry items generally have unforgettable stories behind them, and Powers wants to hear them. She encourages individuals to share their jewelry stories at www.Facebook.com/EarringRenaissance. The most touching stories will be featured on the Earring Renaissance blog.

Early buyers are raving about their Earring Renaissance pendants.

"No more lonely earrings," noted education professional Kathy Hardin. "Finally, there's a fun, elegant way to dress them up and take them out."

Author and radio talk show host Barbara Nowak agreed. "I had been keeping my father's fraternity pin in a box for years. Now it looks beautiful attached to the pendant, and I'm proud to wear it."

"I can customize and create new pieces of jewelry," said professional musician/speaker Lisa Hannah. "It's a beautiful and unique addition to my jewelry wardrobe."

"With my background as a painter, I admit I love the era of the Renaissance when art and science and architecture flourished, so I am drawn to the richness of not only that era, but also the word itself, meaning rebirth," Powers continued.

Powers is known around the world as an accomplished visual artist, singer, songwriter and composer. She landed national TV coverage in the 1990s after painting portraits of a dozen famous songwriters for a collection of oil paintings called "Golden Muses". Major opportunities followed, including commissioned paintings of Franz Schubert, Frank Sinatra and Jackie Wilson. Her Celtic-accented musical compositions have aired on national television, including PBS.

Posted by Chuck Whiting at 7:23 AM