NASHVILLE, Tenn. (November 2020) -- The daughter of black baseball legend Henry Kimbro has spent the past year writing a new book to help commemorate the 100th anniversary of the Negro Baseball League in Nashville.

Harriet Kimbro-Hamilton's new book, "Home Plate: Henry Kimbro and Other Negro Leaguers of Nashville, Tennessee," honors the memories of 18 Black baseball heroes who called Nashville their home. It will officially be released at 3:30 p.m. on Dec. 5 (Saturday) during a virtual book launch on the Zoom platform. Access to the online celebration is free and open to everyone. To attend, visit https://us02web.zoom.us/j/4289850752 and enter the Meeting ID: 4289850752.

"I'm releasing my new book just in time for the 100th anniversary of the Negro Baseball League," said Hamilton, who published a book about her father in 2015. "I wanted the other families of those Negro Leaguers to have their loved ones documented and remembered as my father was in my first book. "'Home Plate' is a book that can be passed down through generations so their legacies are never forgotten." 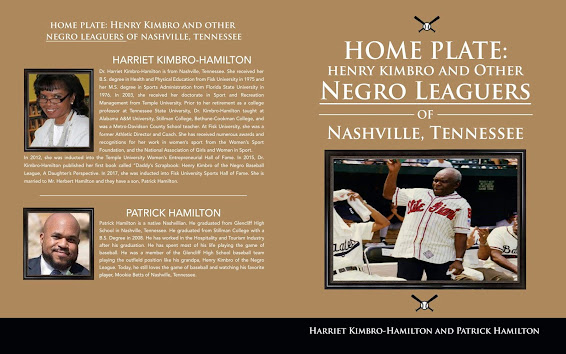 According to the History Channel, the league was launched in 1920, with Black baseball enjoying periods of success in the early 1920s and again after the Great Depression. The Nashville White Sox/Nashville Elite Giants, which were members of the Southern Negro League, made history by introducing some of the greatest baseball players of all time. The integration of major league baseball began with Jackie Robinson in 1947. After that, there was a slow but irreversible influx of talent to the majors, with the remaining Negro League teams generally folding by the 1960s.

The book is a family affair. It features a foreword by Henry Kimbro's great-granddaughter (Harriet's great-niece) Jada Scott, and a chapter titled "My Adventures with Grandpa" that documents the unforgettable experiences of Harriet's son, Patrick Hamilton. When he was 9 years old, Patrick flew with his grandparents to Baltimore to attend a 1993 Major League Baseball All-Star Game ceremony honoring Henry Kimbro and other Negro Baseball League legends. The grandson later shared his experiences in a senior paper at Stillman College. A photo in "Home Plate" shows Harriet's great-niece, Brooklyn Scruggs, visiting the street sign of Junior Gilliam Way in front of the Nashville Sounds Baseball Stadium with her dog Blossom.

The book, which retails for $12, is available exclusively at www.Amazon.com (search "Home Plate: Henry Kimbro and Other Negro Leaguers of Nashville, Tennessee"). For more information about the book "Home Plate" and the upcoming virtual book launch event, contact Harriet Kimbro-Hamilton at HenryKimbro14@gmail.com. To learn more about Nashville's important role in Negro League baseball, visit www.Facebook.com/HenryKimbro or www.Twitter.com/KimbroNlb. 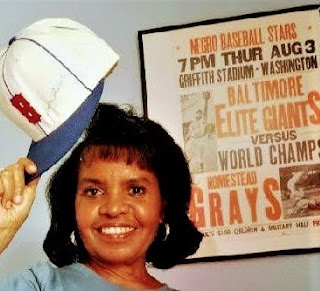 Harriet's mission to recognize Black baseball heroes began when her mother challenged her with the sacred task of preserving the memory of her father, Tennessee Sports Hall of Fame member Henry Kimbro. Shortly before her death, Cuban-born Erbia C. Mendoza-Kimbro gave her daughter an old scrapbook filled with articles, pictures and other items from Henry's career.

"As an African-American, it is well known that stories are passed down verbally," Harriet continued. "This book provides another means of passing down family stories."

Harriet, who recently retired as an associate professor at Tennessee State University, penned chapters that tell the late Nashville Negro Leaguers' stories, contributions and impact on future generations. Descendants of the late stars helped her find rare photos to bring their baseball contributions to life.

The author's book includes information about Vernon and Henyene Green, the husband-and-wife owners of the Nashville Elite Giants (later the Baltimore Elite Giants). Henyene became the first woman in Nashville to become a team owner after her husband's death. Under her leadership, the Baltimore Elite Giants won the 1949 League Championship. Harriet noted that the Greens were accidentally left off a Negro League commemoration plaque that adorns the E.S. Rose Park Baseball Pavilion.

With her niece's encouragement, Harriet decided to write her book for middle school students so they could better understand the players' invaluable contributions. The author plans to donate copies to Metro Nashville Public Schools, and she has included a special "Scavenger Hunt" chapter to provide a free, fun and educational activity in Nashville for children of all ages. Readers can win prizes by finding three Negro League landmarks and e-mailing their photos to HenryKimbro14@gmail.com.

"When Jada read my first book, 'Daddy's Scrapbook,' she said she didn't understand it," Harriet added. "It was important to me that school-age students who lived in Nashville and surrounding counties have a book to learn about those Negro Leaguers who once lived here, too."

Harriet added that the most challenging part of her research was finding pictures of all of the owners and players. She is still trying to find a printable photo of legendary player Taylor Smith.

"The pictures that are in this book are the stories," she said. "The photographs in the beginning show the revisiting of the moment in time when my father was honored at the 1993 Major League All-Stars Game but quickly move into the history of the Negro League. I share pictures of Rube Foster, the father of the Negro League, and Tom Wilson, who is considered the architect of the growth of Black baseball in Nashville."

Dr. Harriet Kimbro-Hamilton served as an associate professor for Tennessee State University in Nashville until her retirement in 2020. During her athletic career, she served as head coach in various sports and athletic director of Fisk University. She also has served as a professor for Stillman College in Tuscaloosa, Alabama. The author also chaired the NCAA Women's Basketball Championship Committee and served on the ABA-USA Committee that selected the 1984 USA Olympic Gold Medal Women's Basketball Team. In 2016, she received the Robert Peterson Recognition Award for her book, "Daddy's Scrapbook: Henry Kimbro of the Negro Baseball League, A Daughter's Perspective." She also has received awards from the Women's Sports Foundation; the National Association of Girls and Women in Sports (the Dr. Nell C. Jackson Award); Fisk University (Women of Prominence Award); and the Temple University League for Entrepreneurial Women (Hall of Fame inductee). She was inducted into the Fisk University Sports Hall of Fame in 2017.

"The book is important because it can reflect the rich, diverse history that exists in our Tennessee culture," Harriet said. "This history needs to be celebrated, shared and appreciated by all Tennesseans. It adds to the knowledge that promotes diversity in education."

Harriet has dedicated "Home Plate" to her family but especially in loving memory of her older brother, Larry Henry Kimbro. He died on Dec. 9, 2019. She noted that Larry was thrilled when "Daddy's Scrapbook" was released to honor their father five years ago.