NASHVILLE, Tenn. (September 2012) – The WannaBeatles didn't win a Grammy this year for their CD "Fab Fan Memories -- The Beatles Bond", but they hope to walk the Red Carpet again in 2013 with "Oh Betty! (The Betty White Song)".

The Nashville band's new song and video honor the ever-popular, 90-year-old actress (the one who beat them out for a Grammy in the "Best Spoken Word Album" category).  The video, which features The WannaBeatles as a '60s-styled singing quartet and Evelyn Ford as a Betty White imposter, is available for free viewing at http://www.theWannaBeatles.com or at http://youtu.be/d_9TG-qwgKU .  The song is available at http://www.iTunes.com .

"Oh Betty!" was released on Sept. 1, just in time to be considered for a Grammy nomination in the Best Short Video, Best Song Written for Visual Media, and Best New Artist categories. Members of The National Academy of Recording Arts & Sciences can vote for the song and video and/or The WannaBeatles at http://www.Grammy.com  till early November. Grammy nominations will be announced on Dec. 1. 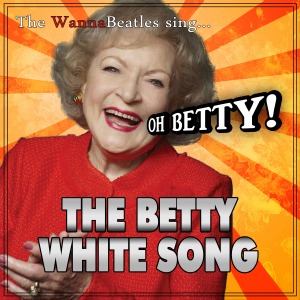 "It was an honor to be a Grammy nominee earlier this year alongside Betty White," said WannaBeatles percussionist David Toledo.  "We wanted to find a creative way to share our unique experience with both our fans and people who love Betty.  And who doesn't love Betty White?"

In their video fantasy, the group fills in for Betty White at an imaginary concert.  They are dumbfounded when a Betty White imposter appears onstage. After the band launches into "The Betty White Song", a magical kiss from the Betty look-alike transforms the boys into a plaid-jacketed, '60s-styled singing quartet.

"The rest is pure silliness, including a Betty conga line and shots of the group admiring Betty's centerfold in a magazine," said vocalist/guitarist Dennis Scott, who co-wrote "Oh Betty!" after returning from the Grammy Awards.

Scott and his band mates worked hard to craft a tune that exudes the true spirit of what Betty White is all about.  The toe-tapping, hook-driven number is reminiscent of clever, sing-along hits from the 1950s and '60s.  The star said she was "very flattered" after listening to the song.

"Ours is the typical showbiz story: Band goes to the Grammys, band loses to Betty, band writes 'The Betty White Song'," Scott added with a laugh.

"The Beatles are well known for putting their anecdotes into songs," said WannaBeatles keyboardist Nathan Burbank. "We are following the sample of our mentors by telling our tale in the best way we know how.  The Betty White video could be the beginning of a reality-based WannaBeatles TV show."

To learn more about The WannaBeatles or "Oh Betty! (The Betty White Song)", visit http://www.TheWannaBeatles.com or send an email inquiry to dsmusic1@me.com.