Published in The Mobile (Ala.) Press Register: This article was written by Claudia "2G" Slaughter Campbell, president of the Fort Mims Restoration Association that oversees preservation and restoration of Fort Mims in Baldwin County, Ala., site of the historic Massacre of Fort Mims in 1813. The restoration organization is observing the 200-year anniversary of events of 1813 and accomplishments achieved during those decades. Campbell, of Tensaw, and her family trace their family lineage back to the settlers of Fort Mims, and she shares here her memories of her family’s deeply rooted connections to the fort and the community surrounding it.

When I think back about my earliest recollections of Fort Mims, a smile comes across my face. I can see my brother and sisters running in the freshly plowed dirt in the field near Boatyard Lake playing and throwing dirt clods at each other. It was around 1954 or so.
Mama was there trying to keep up with all of us as we ran behind the tractor that Daddy was driving. He was plowing up the potatoes he had planted several months before. What fun we were having, but not paying that much attention to the job at hand -- what we were picking up was not the beautiful red potatoes that we would have for supper! Instead, the treasure we were finding were beautiful pieces of painted pottery in varying shapes and colors, they were like the pretty flowers on the plates my grandmother had. 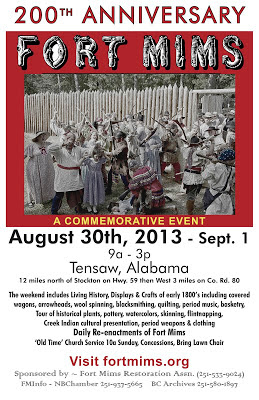 There were sharp triangular rocks, too, that I would later learn were arrowheads. We all had jars with lids, and we filled them to the top! Being the youngest of five, I was immediately “hooked:” I wanted to hunt for treasure every day!

My mother, June Slaughter, began to write a lot of letters back in those days trying to get support for something to be done at Fort Mims. She put a jar out on the counter of the store, put pictures and notices in the newspaper and wrote to the state for help. One of the letters was to the Alabama Department of Parks and Conservation and before too long she received correspondence from Mr. Marks of the Parks Division, State of Alabama! She had stirred interest in Montgomery and the officials were coming to Tensaw to see what they could find. Fort Mims would not be forgotten! I remember that the whole family was happy and we could hardly wait to see what would come next.

Upon arrival to Tensaw a few months later, the officials from the state got my dad, Carl Slaughter, to bring his bulldozer to the site. The area was covered with trees, bushes and lots of undergrowth like the rest of the swamp -- as if nothing had ever happened there. As we were all standing around to see what would be uncovered, Daddy lightly pushed back the top layers of earth, a little at a time. Eventually, we were all able to see the charred remains of the outside walls of the fort. What an exciting time that was -- the site of Fort Mims had been re-discovered!

Because of the way the burned wood was found, the men decided that the fort must have been put up horizontally -- at least in several places. Two posts would have been put into the ground and logs laid between them and built up until the wall of logs was high enough to protect those inhabiting the fort. 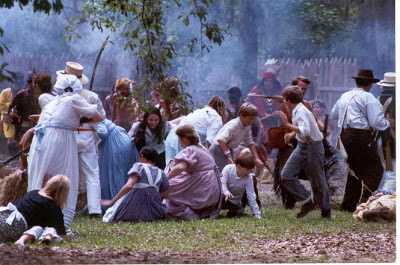 Every year in the heat of August, Mama loaded up all five of her children, occasionally several cousins from down the road and any friends who were lucky enough to be around, and we would head down to Fort Mims for a memorial service. We were fairly good for kids during the “service,” swatting at the mosquitoes and bugs, and trying to understand the serious look on Mama’s face. Before long, she had a fence and a gate delivered to the store, “Smith and Slaughter,” so an official improvement could be made to Fort Mims, as specified. That was 10 years after the Till family donated five acres to the state of Alabama.

The site of Fort Mims was cleared and cleaned, a small area at the time, by the archeological excavations done almost every decade. In the ‘60s, many of the local high school Key Club members, including my brother and cousins from Tensaw and others from Bay Minette, worked on the excavation. They were full of fun and energy as many artifacts were found in the wire bins that were filled with dirt and moved to and fro like a sifter. Excitement would sound out when something was discovered. They were looking eagerly to find whatever may have been hiding in the clumps of dirt, things that had been left from the terrible day in August nearly 150 years before.

Articles appeared frequently in the local papers, the Fort Mims Chapter Daughters of the American Revolution placed a monument at the site, and interest in this historic site in north Baldwin County soared throughout the state and Baldwin County. My grandmother wrote a short book during this time, ‘Sunshine and Shadows -- Along the Trails the Tensas Trod,’ with some of the research she had done throughout the years.

A young girl, totally influenced and surrounded by this much history, could hardly go in any other direction. The mold was set: Fort Mims -- high priority! Do your best to bring recognition to this historic site in Tensaw, Alabama, that changed so many lives and affected the course of history for a young nation. 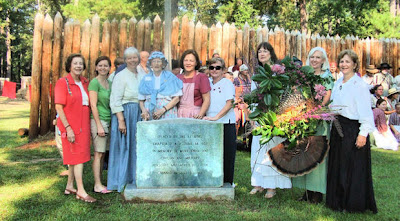 It looks like that is still what I think is of importance as many improvements have been made at Fort Mims by the Fort Mims Restoration Association -- and many more will be completed before Aug. 30, 2013 for the commemoration of the 200th anniversary.

My roots grow deep in the Tensaw Country as my ancestors settled here 200 years ago. Fort Mims was a part of that. Through my grandmother, Claudia Smith Slaughter, my great-great-great-grandfather, Reese Smith, his wife Nancy and their daughter, arrived at Fort Mims on or about, Aug. 29, 1813. Because of the conditions within the fort, they decided to move on, thus surviving the deadly attack on the 30th.

After the massacre at Fort Mims, my ancestors Capt. Joseph Booth and Col. Lee Slaughter rode south with Andrew Jackson to avenge those killed at Fort Mims. They went on to fight the British at the Battle of New Orleans; Jesse Embree and Reese Smith also joined Jackson’s forces during the War of 1812 and the Creek Indian War, all settling in this area.

A portion of Capt. Booth’s plantation remains in the family and his grave, and those of several of his children and grandchildren, are tended by descendants who honor them and the memory of their many contributions during the early days of this country.

Now, I am proud to serve as president of the Fort Mims Restoration Association and we are sponsoring a commemorative event for the 200th Anniversary of Fort Mims on Aug. 30-Sept. 1, 2013. Descendants from all over the country plan to attend. Don’t miss this outstanding event! Visit our webpage: fortmims.org (next week after reconstruction is complete). “Like” Fort Mims on Facebook for recent happenings, photos and see what is going on as we near the anniversary date!

Posted by Chuck Whiting at 9:22 AM