Read all of our "Tin Pan South" reports and other arts-related news at http://www.MusicCityArtsUpdate.com

This is my first time at Winners. Nice venue... good size for hosting "Tin Pan South". But, once again, it was standing room only. Maybe NSAI should add more shows next year. 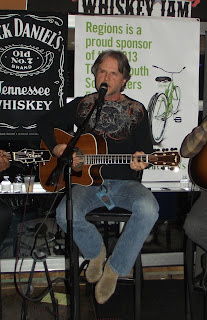 Anytime Marc Beeson plays around town, I want to be there. I'll have to admit he was the reason I came to this show. I was pleasantly surprised by the talent of the other writers on the stage with him.

Anthony L. Smith knows a thing or two about writing a hook and getting his songs cut. I enjoyed his velvet voice on "Watch This" (Clay Walker), "I Want My Life Back" (Bucky Covington), and Lonestar's "What About Now".

Paul Jenkins won me over with his seductive vocals on Blake Shelton's number one "Over" (written with David Elliott Johnson) and "Water Tower" (cut by Jason Aldean). I loved his "If I Didn't Have You" (recorded by Thompson Square). 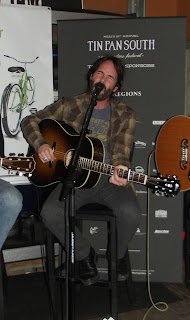 Matt Warren's strong (and, if you ask me, sounding like a tender Mick Jagger) voice knocked me over on two Gary Allan co-writes and cuts, "Learning To Bend" and "Every Storm (Runs Out Of Rain)". His most memorable song was written for his best friend (who was in attendance), former Titans guard Daniel Loper. It seems Dan's favorite singer is Bob Dylan, and Matt sang the song in his best Bob Dylan voice. Loved it... So did everyone else.

Grammy winner Larry Henley was invited to come on stage with legendary guitarist Billy Joe Walker to sing his beautiful standard, "Wind Beneath My Wings." You could have heard a pin drop. 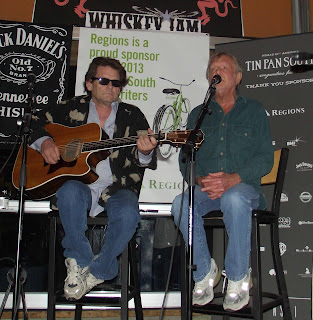 How is it that just about every tune Marc Beeson writes speaks to my heart? I could listen to this guy all night. But if I did, the wimp in me would need a box of tissues for my tears. Have you heard "Be Grateful"? I don't believe it's cut, but it is on Marc's album, "Merciful Love". Buy it! Here's a line to tempt you: "All the things you take for granted now started out as blessings first... be grateful." The house joined in as Marc played Restless Heart's crossover hit, "When She Cries". We all identified as Marc sang his song about being a songwriter (which he dedicated to all of us), "My Resume". 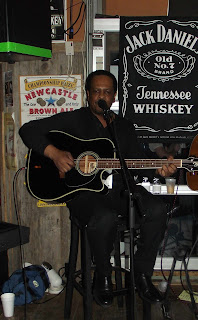 My only complaint is that there sure was a lot of laughing and talking coming from the bar area. You would think pass holders, paying customers, and folks on the guest list would want to listen to the writers. Wouldn't you?

When I woke up this morning, I began to think about what kind of review I would write for Friday night's remarkable show at Douglas Corner. I could write about how fabulous the writers were (a given). Or, I could show contrasts between the talkative (AM radio static?) crowd at Winners versus the super quiet, attentive nature of the DC crowd. What won out in the end was the message that kept churning around in my heart: The singer-songwriters who performed last night displayed a magic that goes far beyond their many hit songs. They are perfect examples of songwriters who started out "green", giving everything they had for a dream they could never let go of. 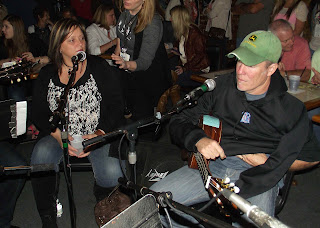 During their hilarious give-and-take banter, something very serious (and heartfelt) crept through. "Douglas Corner was the first club I played when I arrived in Nashville," said one. "We were playing some pretty bad songs back then," said another. "Yeah, we were really green," said a third. Somehow, against almost impossible odds, the four writers found each other (and their dreams). What's come out of these relationships (friendship, spirit, experience and collaboration) has taken them from amateur to life changers. This is pretty much the story of a songwriter's road in Nashville. Other people are there to help you over the hurdles (and vice versa). If you're a tunesmith, chances are you'll never discover what Phil, Kendell, Marla and Casey have. But, as hit songwriter Jason Bloom has said again and again, "You have to keep writing (and knocking)... even till you're 99." It's in a songwriter's genes (or non-resume).

I admit that I was a bit tired when I arrived at Douglas Corner (hey... it was day four). But I definitely had an eye-opening (and exhilarating) experience. The venue was packed to the rafters. But nobody left till the last song was played around 11:30 p.m., and other than an occasional clinking glass, music was the only thing you heard. That was a far cry from Winners, where bar patrons (and some pass holders) laughed, talked and puffed on cigarettes. But "camaraderie" venues have their place in Nashville's musical fabric, too. 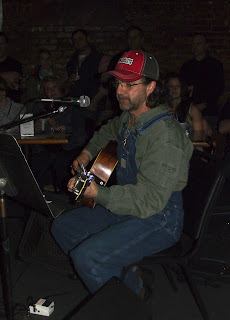 Canadian Phil O'Donnell revealed his excellent musicianship and vocals, playing a wide range of country hits (and newer non-cuts) to the energized, highly appreciative crowd. Highlights included "She Won't Be Lonely Long" (Clay Walker), "Give It All We Got Tonight" (George Strait), "Love Remembers" (where he tried to use Jon Anderson's voice), and  "Doing What She Likes". Phil also performed "Drink It Up", a song that recently stirred up controversy (including a Channel 4 news story) after it was chosen for his daughter's senior class. With this song, the songwriter cleverly uses barroom images to encourage young people to "drink up" life and love (not booze and drugs). He closed with the moving "Suffer In Peace", a song about a man who escapes to the hills (to "suffer in peace") after losing the one he loves.

I don't mean to be trite, but the "wow" word cropped up a number of times during Kendell Marvel's performances. What a voice! This made me ponder (once again) why a one-of-a-kind singer-songwriter (who sings better than better-known singers in the same vein) isn't represented by a major label. RCA flirted with him in the mid-2000s. Kendell grabbed us with powerful renditions of "Turn It Up", "Startin' With Me", "That Lonesome Song", and "Right Where I need To Be". Although he had joked earlier about being a tough guy (in the tradition of Jon Anderson), he gave into sentimentality with a touching performance of "Either Way" (Lee Ann Womack). The four-part vocal harmonies and crusading guitars on his "Don't Think I Can't Love You" (Jake Owen) were unforgettable. He closed with the thought-provoking tune "On The Inside". The outside may look old, tattered and broken, but the inside (of a church or a person) can provide a glimpse of "glory". 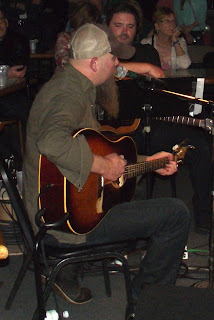 Although I don't know Marla Cannon-Goodman personally, I would really like to. Who wouldn't like someone who says she can whip a guy's [behind]... Phil, Kendell and Casey included. Calling Marla the "redneck country songwriting queen" is probably a stretch (she has too much class), but she sure writes like one... and we're all better for it. We were treated to "get-down, foot-stomping" tunes (such as "Ten Rounds With Jose Cuervo"), as well as heartfelt ballads such as "Don't Make Me" (the guitars and vocals were really beautiful on this one) and "Water Under the Bridge". Marla introduced "My Reflection" with a humorous tribute to artist Marie Osmond, who re-released the song on a compilation disc in 2011. "I don't sound like her, but I love singing it", the artist said. "It's your Mormon song", Casey ribbed. One can see why Osmond chose this song. "I can see what you can't see... in my reflection."

The other artists loved poking at Casey Beathard at every opportunity. That made the show a lot of fun, revealing the close friendships of all four. Casey is an amazing writer. A mix of laughter and heavy applause preceded or followed performances of "Like Jesus Does", "Find Out Who Your Friends Are", "Hold My Beer" (a "shoo-in" never released by Trace Atkins), and "Boys of Fall" (Kenny Chesney). Marla and Phil jokingly claimed that he sole the last song from their idea, "Girls of Fall" (if we heard the title correctly). Phil even played a parody example of the song to hearty laughter and applause. Casey closed with the number one Kenny Chesney smash, "No Shoes, No Shirt, No Problem". That left me with thoughts of splashing waves at Gulf Shores, Dauphin Island, and Mobile (where I grew up).

The guy sitting next to me, a visitor from Austin, remarked how special it was to see and hear the songwriters behind all the great songs we hear on the radio. Many people have no idea how a sometimes-starving life of determination (with many misses before hits) gives life to the great songs we take for granted. The big stars receive most of the standing ovations, but the songwriters deserve them, too. Probably more so. That's one of the things that makes "Tin Pan South" so special. We get to.
Editor's Note: While standing in line, one of our writers struck up a conversation with a songwriter from Granby, Colo. Like so many others, she was there to both support and learn from her mentors and peers. Suddenly, Doak Turner stuck out his hand to say hello. He was stopping by before heading over to the Rutledge. Each night, I run into friends (new and old) who share a similar passion for songwriting and the people who write the songs. It keeps me amped up and moving forward.
-- Chuck Whiting, MCAU Editor 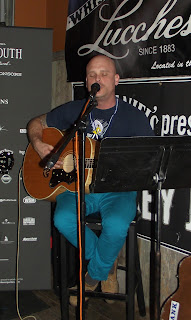 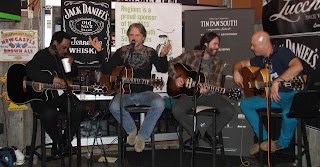 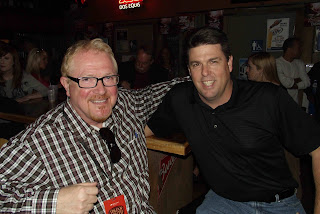 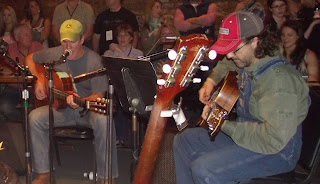 Posted by Chuck Whiting at 2:52 PM