"Tin Pan South" is in full swing, with several hundred songwriters performing at various venues around the city. Choosing which shows to attend on the first night was a challenge for MCAU's two writers. We finally opted to take in the 6 p.m. show at the Rutledge (featuring Jim Brickman, Richie McDonald and Victoria Shaw); the 9 p.m. show at The Listening Room Cafe (featuring Dave Barnes, Kevin Griffin, Charles Kelley, and special guest Emerson Hart); and the 9 p.m. show at the Rutledge (featuring BMI writers Brett Eldredge, Natalie Hemby, and Luke Laird). (Scroll down to the bottom for photos.)

A standing room-only crowd of songwriters filled the lobby of the Regions Roundabout office tower on Music Row. Excitement was definitely in the air as tunesmiths from across the nation renewed friendships (or made new ones) and talked about the upcoming shows. Per usual, the NSAI staff did a marvelous job with food and beverage... and greeting the attendees. Check out photos from the event at http://musiccityartsupdate.blogspot.com/2013/04/normal-0-0-1-95-542-whiting-publicity.html .

Where else can music lovers see three songwriting/artist legends like this performing together on the same stage? Jim Brickman, Richie McDonald and Victoria Shaw all agreed that it was wonderful performing together (reuniting) in a casual atmosphere (without all the bells and whistles we're used to). The mesmerized crowd wholeheartedly agreed. Victoria Shaw opened the show with the clever, upbeat "There's A Song In There Somewhere". Jim Brickman followed with a stirring performance of the instrumental  "Angel Eyes". By the time Richie MacDonald began singing "Just the Rain", everyone knew it would be one of the finest "Tin Pan South" shows in recent memory. 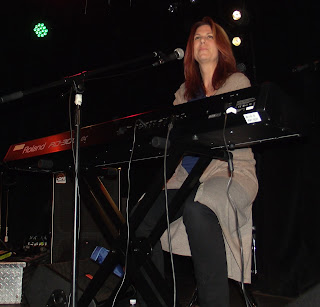 Victoria Shaw transitioned into the Garth Brooks classic "The River", mentioning that the song was "all about shopping." As the appreciative crowd laughed, she explained that her songs are "folkier" when she writes with Garth. She then joined Jim on the holiday favorite "The Gift". Their vocal harmonies were both surprising and moving. Victoria continued with beautiful renditions of "Never Alone" and "I Love The Way You Love Me", a tune she first sang at her own wedding 20 years ago. Victoria and her 14-year-old daughter Ruby stole the show with a rousing, tongue-in-cheek performance of "The Girl With The Fishing Rod".

Jim Brickman is known for his instrumental talents and showmanship, but did you know he used to be a jingle writer? Egged on by his fellow artists, he reluctantly played musical snippets from Pontiac, Puppy Chow and Cheerios commercials. It was fun to observe his playfulness in a laid-back atmosphere. Making his electronic piano sound like a grand, he performed heart-tugging songs about romance and the weather. The Northerner quipped that "the weather" was a common theme for young tunesmiths who grew up in Cleveland. Audience members sang along softly as he performed "Without You In My Life" (from his album "Believe"), "Love Of My Life", and the unforgettable "Valentine". 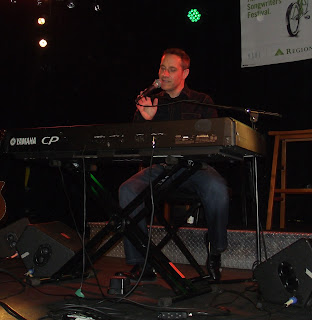 Richie McDonald is quite the jokester, admitting that he used to take away microphones from Southwest Airlines stewardesses to sing a parody version of the Lonestar hit, "I'm Already There" ("We're Almost There"). He once donned a large Lucy head mask (from "Peanuts") to interrupt a Jim Brickman performance. Richie's vocals were in top form as he sang popular songs on piano and guitar such as "Mr. Mom" and "My Front Porch Looking In". Richie, who recently celebrated his 20th wedding anniversary, added groove with a bluesy performance of the cover, "Walking in Memphis". He aptly closed with an amazing, "living room" rendition of the hit, "Baby I'm Amazed By You". 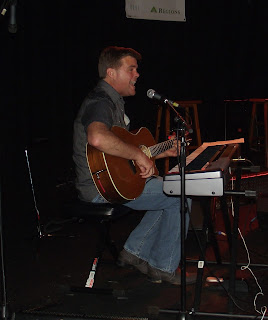 What more could you ask for in a songwriters show? My words can't adequately tell you how great this "Tin Pan Show" was. You had to be there.

Editor's Note: I've always wanted to tell Victoria an interesting story. Some years ago, two friends and I (totally by chance) met an interesting lady while strolling an overlook in beautiful Cortona, Italy. We were amazed when the lovely stranger told us she was the mother of Nashville songwriter Victoria Shaw. After a fascinating conversation, we all parted ways (taking away lasting memories). I think there's a song in there somewhere.

I worked at Ernest Tubb Record shop when I first moved to Nashville 20 years ago. I remember the women in the mail order department complaining about the state of country music and how pop it sounded.  But I loved it…

You could feel the excitement in the cold air standing in line for the second show at the Listening Room. We were all anticipating seeing top writers Dave Barnes, Charles Kelley (one third of Lady Antebellum), Emerson Hart (from the band Tonic), and Kevin Griffin. Most of the tables were full when I got in, so I took a seat at the bar. Soon the place was Standing Room Only. 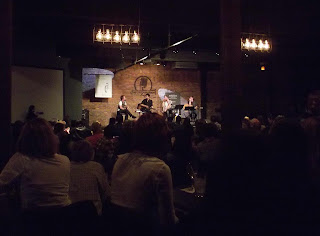 Dave Barnes started the set with “Until You” (recorded by Billy Currington).  Charles Kelley explained that he was really a drummer and agreed to do tonight's show after too many glasses of wine, and then he segued into “I Run to You”.

The wine and alcohol was flowing at The Listening Room, too. A long line formed at the bar, and people were happily chatting at their tables as the show progressed. I was having a little trouble figuring out the titles to some of the lesser-known songs. I turned to a friend to ask if he knew, but he didn’t either.

I enjoyed Kevin Griffin’s “Collide” (which he co-wrote with Howie Day) and Emerson Hart’s “Flying”. Maybe the room was too big (or maybe I’m getting old and out of touch), but for some reason none of the songs were stirring any emotion in me. The crowd seemed happy though. Drinks continued to pass around. Suddenly, the guy at the bar next to me (who had been a little shaky for the last half hour) was splayed out on the floor. Then I got it! People were here tonight at the Listening Room to party and have a good time. I grabbed my coat and headed over to the Rutledge, hoping to redeem the evening.

Crossing the few blocks to The Rutledge’s BMI show, I was kicking myself for not going to that show in the first place. Plus I dragged a friend to that other event!
When I entered the club an hour and 20 minutes into the set, Brett Eldredge was singing “One Mississippi... two Mississippi...  counting down the seconds... standing in the wreckage of love...  on a cold, grey Jackson dawn”.  Now that’s songwriting. I squeezed through the Standing-Room-Only crowd and found the one remaining space by the wall upstairs as Luke Laird began singing “Beat This Summer”, his hit with Brad Paisley (also written with Chis Dubois). 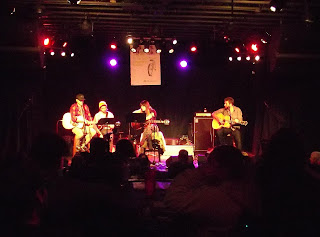 By the time Natalie started singing “I’m A Tornado”, I was in songwriter heaven. I continued to be moved and entertained the remainder of the evening. Highlights included Brett’s “Raymond”, which he co-wrote with Shane McAnally describing the effect Alzheimer’s had on his grandmother and his response to her. Natalie’s “Pontoon”, which went to number one for Little Big Town, was a real crowd pleaser. And Luke’s (the guy has had 12 number ones!) “Put A Drink In My Hand” had us all singing and raising our longnecks, real or imaginary.

As I looked around, I saw a crowd that was inspired and elevated. I didn’t see one person passed out on the floor.

Do you have a "Tin Pan South" story/experience to tell.  Please send it to us at Info@MusicCityArtsUpdate.com . 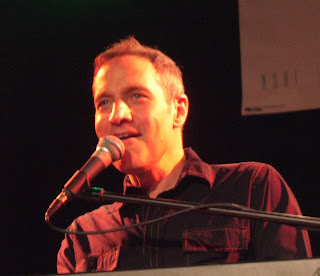 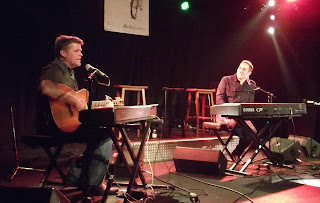 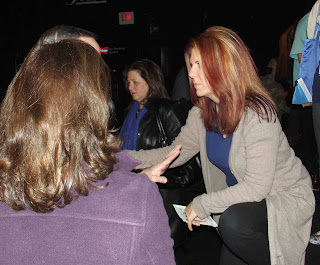 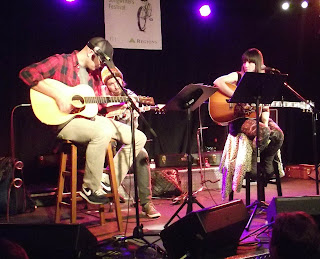 Photo: Luke Laird and Natalie Hemby perform at The Rutledge. 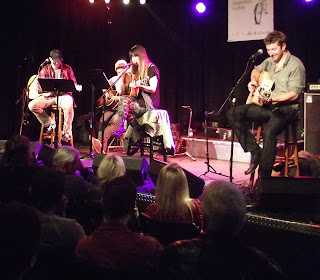 Posted by Chuck Whiting at 2:51 PM