The schedule for this show listed only two names: hit writer/CCM artist Ben Glover and CCM crossover artist/writer Amy Grant. On these two names alone, the house was packed to standing room only. There were no complaints when country artist and hit songwriter Billy Montana and hit writer Matt Jenkins turned up as surprise guests. I caught Matt's brother, Paul Jenkins, at Winners on Friday night. Talent sure runs in the Jenkins family! 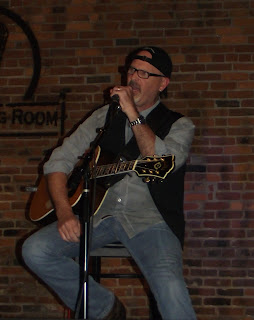 Billy Montana performed his now-classic tunes, "Bring On The Rain" (Jo Dee Messina), "House Of A Thousand Dreams" (Martina McBride), and "Suds In The Bucket" (Sara Evans). Billy said a friend had called him saying, "Hey, they're playing your song on 'American Idol'." When Billy turned on the TV, contestant Kelly Pickler had just finished singing "Suds". He heard Simon Crowell comment, "Of all the songs you could have sung, why did you pick this one?" An open-jawed Montana pointed at the TV and yelled out, "But that's my song!"

Billy said he moved here from upstate New York in 1989 in his '77 Monte Carlo with two kids and one on the way. In '93, he lost his publishing deal. He then commented to a friend, "What I need is a Garth cut." He got one 14 years later with "More Than A Memory", a song Lee Brice and Kyle Jacobs had been working on and brought Billy in to finish. Billy said that Lee's line, "Dialing six numbers and hanging up...", was what really sold Garth on the song. 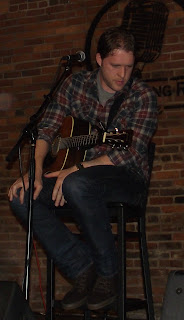 Matt Jenkins sang the upbeat "Blue Jeans Baby", "Running Out of Air" (Love and Theft), and "Fade Into You", which will be featured this fall on the new "Nashville" soundtrack album. The song was cut by Clare "Scarlett" Bowen.

Besides writing pop, CCM and country hits for others, Ben Glover has several albums out on his own. We were treated to his incredible vocals on the song his wrote for his wife, "I See You". He also performed "Hard To Love" (Lee Brice) and "I Can't Outrun You" (recorded by Trace Adkins and Thompson Square). 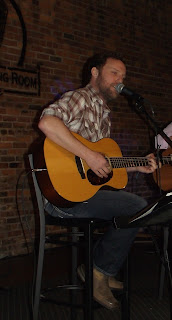 Amy Grant sang the familiar "I Will Remember You" from her multi-Platinum album "Hearts In Motion", and "Find What You're Looking For" from her last album, "Somewhere Down The Road". I was happy to hear some new songs from her upcoming May album release, "How Mercy Looks From Here". I wasn't disappointed. The title cut is all I hoped it would be. She was inspired to write the song after an emotional roller-coaster year (the loss of her mother, the death of a friend in Afghanistan, and the joy of her step-daughter's wedding). She invited her producer, Marshall Altman (Marc Broussard and Audry Assad), to join her on "Our Time Is Now". There was a certain sound that Phil Ramone had captured on an old Simon and Garfunkel album. Amy called Ramone to inquire about it. He graciously told her what he'd done, adding some stories from his long career. Phil died a few weeks after that conversation. The song "Our Time Is Now" features the legendary Carole King. The evening ended with Amy's new duet with James Taylor, (love tells us) "Don't Try So Hard". 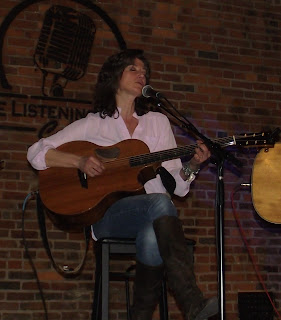 Afterwards, while washing my hands in the men's room, I struck up a brief conversation with the guy next to me. "It's a special night, isn't it?" he said. "It sure is," I answered, feeling fortunate that I was one of the lucky people to see and hear such a remarkable group of writers.

We ended "Tin Pan South" where we had started five days earlier. The Rutledge was the perfect setting for a show filled with tongue-and-cheek ribbing, self-deprecating humor, entertaining stories (serious and not-so serious) and unforgettable hooks and melodies (some coming from self-proclaimed farmers and hillbillies). One of the performers even chewed tobacco as he sang. Some of that rubbed on me (not the tobacco). I woke up thinking of song ideas I never expected to have. 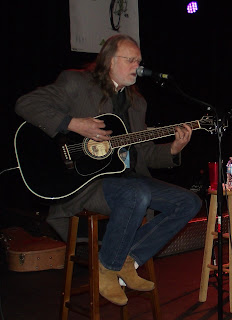 Aaron Barker (the Blue Bell Ice Cream jingle singer) was a gracious host. Acting more composed and laid back, he expressed his love of songwriting, telling the large crowd how special it was to perform on the same stage as Lee Thomas Miller, Chris Wallin (with wife Camille), and special guest (the crazy cowboy) Wynn Varble.
"Nashville is the last songwriting community," he said with a note of heartfelt seriousness. "When a fellow songwriter is in trouble, we all come together to help."

Aaron put on a wonderful show, performing velvety-voiced classics such as Lonestar's "What About Now" and George Strait's "I Can Still Make Cheyenne", "A Love Without End, Amen", and "Goodbye, Farewell, So Long". He closed with "Baby Blue", a surprise first cut (and number one hit) by none other than George Strait.

"We'd lost just about everything," said Aaron, looking back on hard times in Texas before making it big. "Suddenly, out of the blue, I received a check from BMI. It had a lot of numbers. Somehow, my publisher had gotten one of my songs to George Strait. It was the number one song, but I didn't even know it. When I showed the check to my stepdad, he thought it was a sweepstakes promotion."

Chris Wallin made no apologies for his love of "suped-up" classic cars. He remembered being at a car show when he learned his song "Something to Be Proud Of" (Montgomery Gentry) had hit number one. Knowing a big royalty check was on the way, he left the lot driving a 1966 Chevelle. 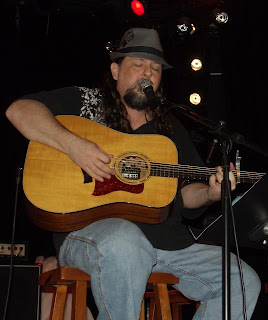 (Photo: Chris Wallin)
"We need to be proud of what we have... even if it's still in the shop," he laughed.
The artist used his rich, Southern-as-can-be baritone to sing current and/or soon-to-be classics such as "Man", "Love Me If You Can" (Toby Keith), "I'm Trying" (Trace Adkins), and "Don't Blink".  On more than one occasion, he raised his left hand to show off a finger he had accidentally injured earlier in the day. He was concerned the paper cut might affect his guitar playing, but it didn't.
"'I'm Trying' reached number 40 and stalled," Chris noted before singing the song with his wife, Camille. "When Trace Adkins got arrested for DUI, the song immediately jumped five spots."

Chris handed his guitar to (bass diva) Camille a couple of times during the show. She has a great voice that complements her husband's... almost a country-accented combination of Bonnie Raitt, Wynonna and Etta James. It's nice to hear the Southern blues in country music. The audience thoroughly enjoyed her performances of the growling "One Way Ticket To Gone" and "A Good Cry".
Family man Lee Thomas Miller sang and played songs celebrating lost love ("She's Cryin' On Her Suitcase"/Casey James), the rush of life ("You're Gonna Miss This"/Trace Adkins), and manhood ("I'm Still A Guy"/Brad Paisley). He was proud to introduce his wife, who was sitting in the audience. Their "Miller bunch" kids were at home with the babysitter. 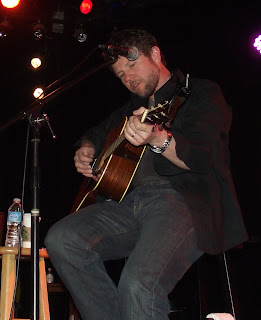 "The reporter treated me like a stupid country hick who didn't appreciate art, and I played along," Chris said. "Her story was scathing."

Wynn Varble wasn't listed in the program, but we sure were glad he was there. He kept us in stitches every time it was his turn to play. The cowboy-hatted farm guy (with a tobacco tin in his back pocket) always provided a joke before galloping into various trailblazers, including " A Little More Country Than That" (Easton Corbin); "She's A Little Too Country For Me", "Things That Never Cross A Man's Mind" ("American Idol" contestant Kellie Pickler); and "Waitin' On A Woman" (Brad Paisley). 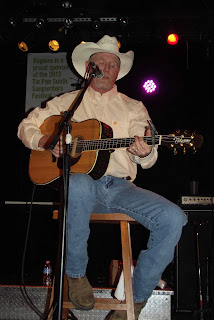 Then he got serious, telling us how Willie Nelson had selected one of his songs for a recent album.

"When my phone rang, a guy on the other end said, 'Hello, this is Willie'," said Wynn with as much seriousness as he could muster. "I didn't believe it was him at first. He said he'd lost the recording I sent him and wanted another. I said, 'Sure, I'll send you 500 copies of the song if you want 'em.' A while later, I got a call askin' for the lyrics. He was in the studio recordin' it."

The audience listened intently as Wynn sang about a cowboy's adventures on Chisholm Trail, through Death Valley, and across dusty plains. Some of them had heard the Willie Nelson version... others hadn't.

During the past five days we've heard and seen just about everything when it comes to songwriting. It's truly been an amazing week... more than a memory.
-- Chuck Whiting, MCAU Editor 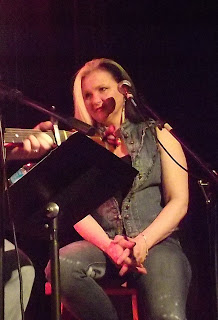 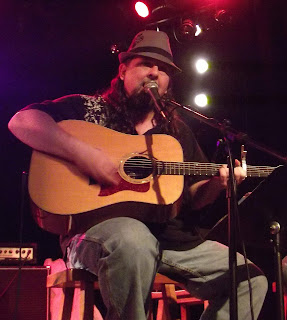 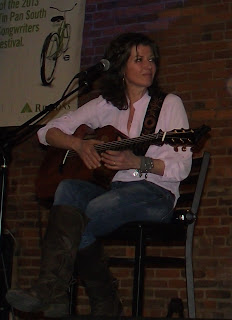 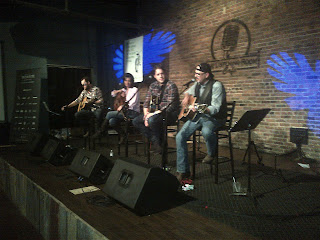 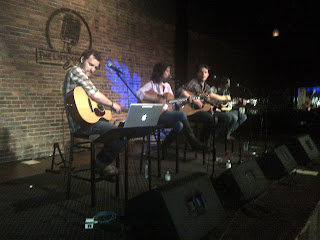