MCAU's other writer had a prior engagement, so deciding which "Tin Pan" shows to review fell totally on my shoulders. I opted to attend the ASCAP show at the Hard Rock Cafe (featuring Chris DeStefano, Katrina Elam, JT Harding, and Matt Jenkins). 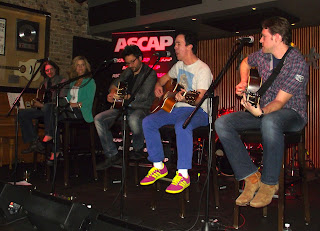 The performing rights organizations know how to put on a show. After being blown away by BMI's stellar cast of writers at the Rutledge on Tuesday night, I decided to see what ASCAP would do. I'm so glad I did. Initially, I'd planned to leave the ASCAP show midway through to take in the last half of the SESAC show at a nearby venue. But the ASCAP writers had me hooked from start to finish. I couldn't muster up the determination to leave. 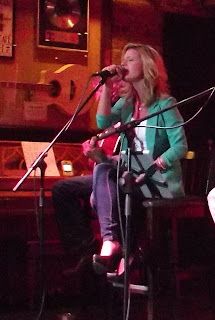 Last year, I mentioned that it was hard to understand why the beautiful Leslie Ellis hadn't landed a major record deal. Now I have to add the beautiful singer-songwriter Katrina Elam to that list. Katrina says she's essentially given up her dream to be a singer, opting for songwriting instead. The artist's songs (including "Play", "Say Goodnight" and "Easy") are amazing, but her voice takes them to new heights. Effortlessly, with soul, Katrina awed the packed upstairs concert hall with soaring vocals that lifted the heart. Her performance of the tender "Love Is" took my breath away. Katrina's closing performance of the country/folk lullaby "Heaven" (accompanied on piano by co-writer Bonnie Baker) reminded me a little of Alison Krauss.

When it comes to vocals, I'd have to place Chris DeStefano in the same ballpark. He almost seems to cry as he sings, bringing deep emotion to every word. The audience listened intently as he sang cleverly crafted tunes such as "Every Other Memory", "Why Ya Wanna", and "Don't Ya". The killer hooks (both lyrical and melodic) continued with "Hey Girl" (Billy Currington's new single) and "Good Girl" (a collaboration with Carrie Underwood). A heart-tugging moment came when Chris sang the ballad "Little Girl Don't Grow Up Too Fast", telling us to cherish every moment with those we love. We "can't slow down this thing called life." 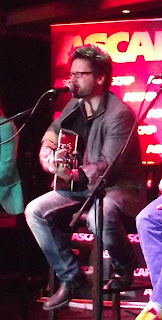 Midway through his set, JT Harding stopped to recognize a 7th grade school teacher who had driven all the way from Michigan to Nashville to hear him. That humble, fun and down-home nature was evident with every one of his performances. JT is the kind of writer you root for. His unprecedented success came through hard work, determination, and a passion for songwriting (something that should rub off on the rest of us). Members of the audience sang along as he performed infectious tunes such as "Smile", "Somewhere With You", and "Alone With You". Feet were tapping as he strummed his guitar rapidly to "Nobody's Sad On A Saturday Night" and "Party Like A Rock Star". Memories of youth (and a yearning to dance) came to life with his rendition of "Love In America".

Matt Jenkins has a baritone to die for with wit to match. He opened with "Tipsy", a cleverly crafted tune that mixes romance with images of Coke, sugar highs, leaning and snuggling... the kind of song that's a sure hit for country radio. Matt showed his broad range as a writer and singer. The ballad "Some Horses" showed his tender side. A man realizes that his horse (or his love) "can never be tamed, so he (had to) let her go." It's easy to see why the mesmerizing ballad "Fade Into You" was chosen for the popular TV show "Nashville". Matt mentioned how special it was to share the stage with Katrina, recalling how they had both signed to Universal South some years ago. The artist also showed his upbeat side, performing the driving tune "Running Out of Air". He closed with the thought-provoking "Watered Down", a song that reflects on the slowing down of life after 40. "We still love our whiskey... It's just a little watered down." Matt offered this advice for songwriters in the audience: "The people who make it stick around." 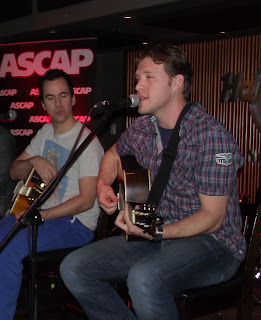 I left the Hard Rock Cafe feeling great... thankful to be in a songwriters town. 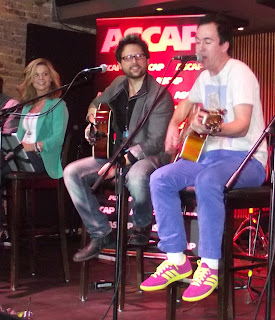