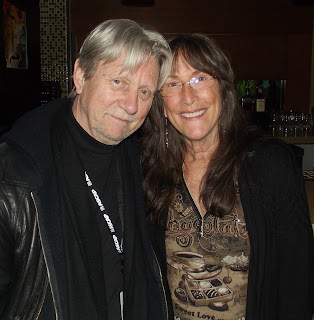 As soon as we sat down, we were greeted by the affable (award-winning songwriter encourager) Debi Champion. We later spotted Debi with ASCAP legend Ralph Murphy (see photo with this review). We knew then that we were in for a great show.

It was a wonderful change of pace. Liz Hengber, Wil Nance, Kerry Kurt Phillips, and Steve Williams are legends of the traditional country songwriting trade. They tugged on our heartstrings from beginning to end with an impressive list of hits from the '80s, '90s and 2000s (from McEntire to Diffie to Strait). We laughed, kicked our feet back (as best we could in a lounge setting), and enjoyed songs that have been part of our lives for decades. It was good ole country fun. 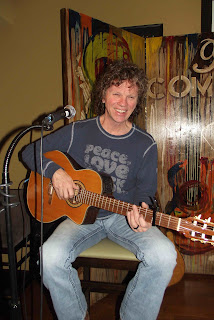 Offering countrified wit at every opportunity, Wil Nance played hit after hit, including the mellow "Only A Girl" (Brad Paisley) and "Round About Way" (George Strait). He struck a gentle chord with "She's Everything" (his wife's favorite), a song that lists the many things a man loves about his girl. His emotional performance of "I Get To" still lingers almost 24 hours later. In this classic, he expresses thanks for the opportunity to rock his baby girls, coach Little League baseball, and work to make an honest living. "A lot I don't have to do... I get to." That's a message worth savoring.

Kerry Kurt Phillips has won a number of awards, including "Country Song of the Year", but one would never know it by his down-to-earth demeanor. His thoughtful, humble nature was strongly evident as he charmed the audience with "Pickup Man" (Joe Diffie), "Life Happened", and "Down On The Farm" (which he calls a "tired, old hit"). The crowd was breathless when he sang "Almost Home", a song about a homeless man whose daydream of arriving home is interrupted by a caring stranger. But his performance of "This Ain't Nothin'", a song about a Birmingham, Ala., tornado victim, brought down the house. The twister may have destroyed the man's home, but it wasn't anything compared to what he'd already lost. Kerry took a few minutes to thank NSAI for its efforts to protect songwriters from the illegal file sharing of songs. "It all begins with the songs," he said. 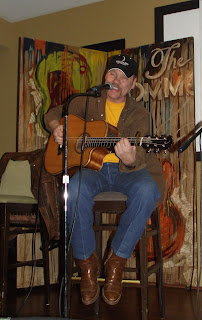 Liz Hengber (her fellow writers call her "Broadway Liz") showed she is one of the best songwriters (and storytellers) in the business. She introduced her hit song "Still" by recalling how special it was to work with Reba McEntire for 10 years. "She still sends me Christmas cards every year," the tunesmith said. Liz amazed the crowd with a repertoire that included "Midnight Girl", "I'm Gonna Get You Stoned Tonight", and "Stubborn One" (Trace Atkins). Her performance of Trick Pony's "I'm Not The Bride" drew laughter (and a few agreeing nods). She closed with "She's More" (a number one hit for Andy Griggs), a song about an unexpected and lasting romance. "I saw the woman I was born to love... Took me by complete surprise... When my heart got lost in those deep green eyes...." 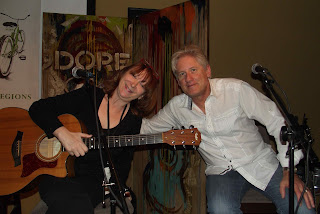 Steve Williams told the crowd that he was only there to play a few chords for Liz. After the laughter died down, he eased into George Strait's "Where Have I Been All My Life". He seemed to pick the perfect song to play at just the right time, performing "I'm A Pretty Big Deal" (country swing), "The Only Way He Knew How" (a co-write with Liz), "Till I'm Blue" (showing his vocal range), and "Redneck Yacht Club" (as country as you can get). He showed lyrical brilliance with "Thank God For Faith", a song that describes the opposing viewpoints of two people named "Faith" and "Fear". Speaking of yachts, Steve announced that the new Internet radio station Redneck Yacht Club (.com) will launch this summer with a good stable of traditional country hits.

I left the Commodore feeling inspired and eager to write a new country song!

The Station Inn was filling up when I entered. Boy did this show have a big guest list. It was a quarter full when the pass holders got through the door. Heading over to the kitchen side, I found a seat next to a great new Americana artist, Don Pedigo. You need to check him out at donpedigo.com! A couple seconds later, a guy with a big heart and a lot of hair set two beers on the table. Stretching out his hand, he said: “Hi, I’m Earl Bud Lee.” Once again… you just never know who you’ll run into in this town.

It’s hard to beat a lineup with Bobby Tomberlin, Larry Gatlin, and Leslie Satcher. All you can do is add to it. And they sure did by inviting special guest Vince Gill. These guys have been friends for years, which was evident in the way they needled each other relentlessly throughout the show. Larry came in a little late having just come from the Ryman where he hosted the "Country Classics Show". He had on a white shirt with a long gold scarf tied in a Windsor knot, using the scarf as a tie. Vince asked if he had just come from Marty Stuart’s garage sale. Gatlin shot back: “I wish I had a wife as famous as you... I could say anything I want to and get away with it.” This banter continued throughout the night.

Bobby Tomberlin got the show started off with the hit he wrote with Darryl Worley, “Good Day To Run”. I knew I was right where I should be! Later, Leslie tore up the place with her smoking blues song “Gypsy Boots”.  Joss Stone has nothing on this Texas girl, hmm... hmm... hmm.  Besides accompanying everyone, Vince brought a tear to my eye when he sang “Pretty Little Adriana”. Then he did it again with the new song “I Will Ride The Rails No More”. Larry Gatlin graced us with his incredible tenor on “My Heart Comes With Strings Attached". I also loved the song he wrote and sang with Leslie that I believe is called “Come On Home, Come As You Are”.

Bobby had us on the edge of our seat with a new song called the “Grand Ole Opry”. The Opry is personified and sings: “They say that I’m the one that made Country Music what it is today… But it’s the stars who crossed my stage that are the ones…”. Afterwards, we were delighted when Jan Howard was called up from the audience to sing “Heartaches By The Number”.  Everyone, young and old, joined in on the chorus!  We were treated again when Bobby called his beautiful wife Candi Carpenter to the stage to sing a song she wrote with Bobby and Shayne Fair titled “Heartaches Don’t Have A Closing Time”. Wow!

Footnote:   I have had dozens of inquires concerning the man who fell off the bar stool on Tuesday evening. Many have asked if it was MCAU’s Chuck Whiting.  Ordinarily I would nip a rumor like this in the bud before it spread all over town. But on second thought, it’s hard to buy good PR like this!  So I’ll let you decide… 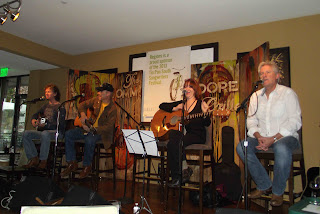 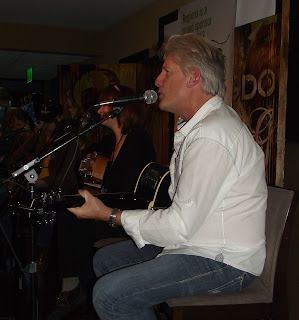 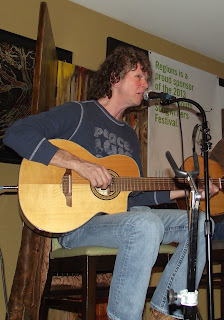 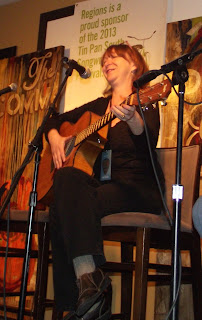 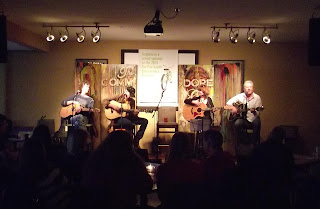 Posted by Chuck Whiting at 3:34 PM