During last week's opening party at the "Nashville Film Festival", an ecstatic couple greeted me with the words, "We received two offers!". They had spent the past few days (working day and night) to land financing and distribution for their independent film. 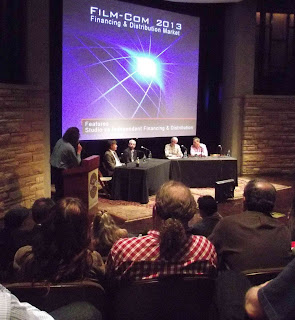 Success stories like these are hard to come by. Filmmakers (like songwriters) spend countless hours (sometimes many years) networking at conferences, honing their craft, and knocking on countless doors. More than 150 of them packed the Country Music Hall of Fame's Ford Theater all day Wednesday (April 17) to learn from the top professionals in the field. Panels covered topics ranging from "How to Launch a Television Concept" (scripted or unscripted) and "Financing and Distribution of Documentaries" to "Women in Film & Television" and "Navigating the Studio System". Thanks to organizations like Film Nashville and events like "Film-Com", filmmakers' dreams are coming true (against the odds).

During the late afternoon session "Navigating The Studio System", moderator Andy Van Roon showed us why he is one of the most knowledgeable (and hard working) film industry professionals in Nashville. He presented excellent questions at the right times and made a point to clarify some of the panelist's complicated (financial-speak) answers.

The distinguished panelists (Allen Schwalb of Star Partners, John Hadity of Entertainment Partners, David Henry of East-West Bank, and Diego Martinez of Millennium) shared invaluable insights on how to finance a film -- a necessary ingredient for production, marketing and distribution. Following are highlights from their one-hour session.

To land equity, mezzanine and gap loans and/or investors for your film, it's essential to do the following:

* Get all of your ducks in a row. Develop a business plan that details all aspects of your project, including production costs and projected sales (both domestically and internationally). How much did similar films cost to market, and what kind of profit (if any) did they make?

* Try to involve an internationally known actor to add credibility (and foreign sales) for your project. (Think Magnolia Pictures and Nicole Kidman.)

* Pre-sales can serve as collateral for your loan. Foreign box office revenues have increased dramatically. Research to find a dedicated, highly respected international sales agent to help land sales in foreign markets. Team up with someone who has a proven track record.

* Keep after your sales agent (as the producer). Use the Internet to check results. Your film could easily be overlooked, especially if he or she has more than several clients.

* Remember that all sales agents expect to be paid. Some of them will ask for a fairly large "chunk" (percentage) of the profit.

* Should you be fortunate enough to land a distribution deal with a major studio, be sure to study the contract closely. The studios recoup certain expenses before you ever receive anything. Some even try to include marketing expenses such as congratulatory dinner parties. Play it safe by having a legal representative represent you in the negotiations.

* Relationships are very important. Network to build a team of collaborators, mentors, sales agents, investors and distributors. Buy a film industry directory. Introduce yourself in person at industry-related offices in LA, New York and Nashville. Ask for casting advice to help build value for your film.

* You need seed money to get started. Get to know your doctors, dentists and others for financial support. New digital technology makes it easier and cheaper to make an independent film.

Footnote: The "Women in Film & Television" panel offered insights on the challenges women sometimes face when trying to launch a project in the highly competitive, sometimes "male-dominated" industry. Here are a few tips from the panelists:

* Women can overcome perceived disadvantages if they are business-like, have a tough skin, learn how to play "being female" (as a strength), and be aggressive. "Don't let them get ya!"

* Female directors should pick their teams very carefully. "Have people who are willing to go into the trenches with you."

* Remember that some countries are more "male-dominated". One example is Serbia, where female producers, directors and actors may face bigger challenges. When facing a challenge, "let your work speak for itself."

* Try to keep your weekends free. Hire someone so you can "have a life."

Coming Up: Coverage for this month's "Nashville Film Festival", including the Red Carpet, Demetria Kalodimos, and the engrossing new film, "Mud". See our stories with photos at http://www.MusicCityArtsUpdate.com .
Posted by Chuck Whiting at 11:25 AM