NASHVILLE -- Middle and high school students can experience the literary world of William Shakespeare during a week-long creativity camp at Monthaven this June led by playwright/actress/educator Debbie Watts.

"Shakespear-ience", a collaboration of the HAC and Nashville Shakespeare Festival, is designed for middle and high school students. It will occur at Monthaven from June 1-6 with classes occurring Monday-Friday from 9-11 a.m. Students will participate in a variety of informational activities, including Shakespeare's coined words and literary allusions from his plays. 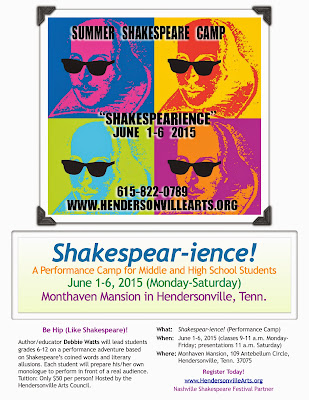 Each student will prepare a monologue from a Shakespeare-penned play to perform in front of an audience on June 6 (Saturday). A panel of actors, directors, educators, casting agents and critics will offer feedback on the student performances. Each student will receive a DVD of his/her performance.

Tuition for "Shakespear-ience" is $50 per student. To register, visit http://www.hendersonvillearts.org/.
A veteran educator, professional pianist-vocalist, and author, Watts is currently starring in the multi-media musical stage play, "The Ryman Diaries". Other theatrical roles include Mollie in "Mousetrap" and Agnes in "I Do, I Do". She began her career as a writer-producer for TNN: The Nashville Network. She has taught grades 6-12 in Sumner County Schools and served as an instructional and common core coach.  Watts, who was named National Vocabulary Championship Coach of the Year in 2008, performed regularly as a piano-vocalist at Loew’s Vanderbilt for many years. She earned a bachelor's degree in English from Lipscomb University and a master's degree in English/Composition from Austin Peay State University.

As nominees for the 2015 Governor’s Arts Leadership Award, the Hendersonville Arts Council at Monthaven conducts clay, art, music, songwriting, brewing, film production, literature, and photography classes, workshops and camps for all ages. Art exhibits are displayed in their 5-parlor gallery at historic Monthaven and visiting hours are Tuesday – Friday from 9 a.m.-3 p.m. and Saturdays from 10 a.m.-2 p.m.  The Hendersonville Arts Council Gallery at Monthaven is located at 1017 Antebellum Circle, Hendersonville, Tenn. 37075. Call 615-822-0789 or visit www.hendersonvillearts.org for more information.

Posted by Chuck Whiting at 3:04 PM