Joe Henry is a wry storyteller. His narratives are intimate and genuine. He is a maverick who seems to operate in his own plane.  He is about to release his 14th studio album "Stream" in October.  Joe performed several new songs from the album including “Climb” and “Believer.”  The most poignant moment came when Henry introduced his only piano song “This Was My Country.”  He said it was July 4, 2005, and America was involved in a war he didn’t believe in.  He had no reason to celebrate the holiday.  He had to fly out of LA that afternoon, and as he does on most flights, he started to work on a song.  But all that came out was rage.  He stayed with it and eventually saw a ray of hope. It was then that the music started to come. “This was God’s country, this frightful and this angry land... But if it’s his will, the worst of it might still somehow make me a better man.”

Like many, I had never seen sisters Shelby Lynne and Allison Moorer perform together.  They recently released their first duet album "Not Dark Yet" comprised of favorite cover songs.  They drew on these cuts for their performance.  I only stayed for the first 20 minutes but was fortunate to catch the sister’s incredible harmonies on the Louvin Brother’s “Every Time You Leave” and the Bob Dylan penned “Not Dark Yet.”

I was one of the 4 million people who were introduced to Dustbowl Revival on Facebook when their “Never Had to Go” video featuring Dick Van Dyke went viral.  I caught them two years ago at City Winery and was happy to see that they were playing AmericanaFest this year.  This eight-piece Americana swing band from Venice, California, rocks!  Starting in 2007 when guitarist Zach Lupetin placed an ad on Craigslist hoping to form a group inspired by brass and string bands, the band has moved from an acoustic sound to funky soul and roots-infused rock. I for one am loving it!  “If You Could See Me Now” is a prime example of the new sound, a real crowd pleaser.  The band returned to their roots for their last two numbers coming down from the stage and playing without amplification in the middle of the audience.

At this point I wanted to head across town, but MCAU Editor Chuck Whiting wanted to stay at the Anchor… I’m glad we did!

The Steel Wheels hail from Harrisonburg, Virginia. All of the members were born into Mennonite families and grew up on bluegrass and mountain music.  They formed as a string band in 2004, later weaving  Americana into their music.  Trent Wagler is on lead vocals, guitar and banjo;  Jay Lapp plays mandolin and National Steel guitar, Eric Brubaker is on fiddle; and Brian Dickel is on bass.  They all sing delightful background harmonies, are fine musicians, and pen their own songs. This band is tight. What a great find and surprise! 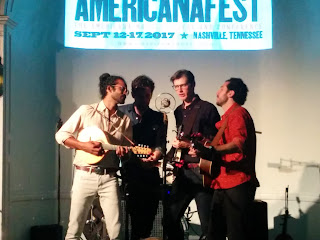 Next up after working through some technical difficulties was the Boston group Darlingside.  I had read about their great harmonies. They exceeded all expectation.  NPR describes them as “Exquisitely arranged, literary minded, baroque folk-pop." I couldn’t agree more.  The band is comprised of Dave Senft on bass; Don Mitchell playing guitar and banjo; Auyon Mukharji on classical violin and mandolin; and Harris Paseltiner on guitar and cello.  They gathered around a single microphone, blending their richly textured voices into glorious harmonies that breathed life into their lyrics.   My favorite number was “The God of Loss,” just incredible.  Go see this band when they play in your area.
Posted by Chuck Whiting at 6:44 AM