Chuck swung by to me up at work, and we headed to Salsas Cuban Restaurant on Palmer Place for the William Morris mixer. They welcomed us with a fireball shot! We later sampled some delectable Cuban hors d'oeuvres, washing them down with some local Yazoo beer. Yum!

We decided to walk over to City Winery to catch their shows for the evening. 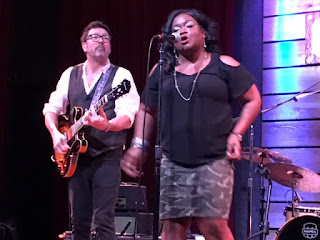 Shemekia Copeland: One of the best woman blues artists alive! She treated us to songs from her new album, "America’s Child." The title was inspired by her hopes and dreams for her 2-year-old son. Producer Will Kimbrough joined Shemika and band for most of the set, starting with the driving “Ain’t Got Time for Hate.” Two highlights for me were “Would You Take My Blood?” sung to a racist that needs a blood transfusion, and the Rolling Stones-like burner “In the Blood of the Blues.” Copeland lives inside the lyrics: “I’m the jewel in the crown of the mighty kings of Africa... I’m the hands on the shaft of the spear that the slew the lion... I’m in the soul clinched wife of the man on the demon slave ship... I’m the fire in the crack of the whip on the good man’s spine.”  Lord, have mercy... this woman can sing! 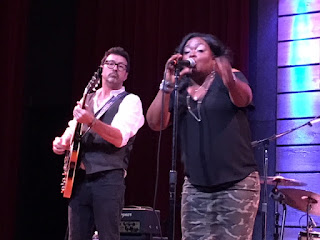 Guthrie Trapp: Hands down the most innovative guitarist in Nashville. He has worked with the greats from Garth Brooks to Earl Scruggs.  He blew me away on Taj Mahal’s “Buck Dancers Choice,” and his own compositions “Pick Peace” and “Patricia.”  This guy is all over the neck of the guitar sounding like two players instead of one. He is tasteful, precise and a lot of fun to watch. 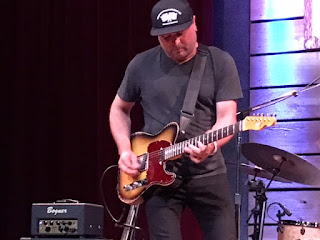 John Oates: No introduction needed here. The last few years, John’s been playing roots music and loving every minute of it. He is backed by a crackerjack band that includes Guthrie Trapp. He started with the 1924 pop song “Anytime” by Emmett Miller, a personal favorite of mine.  Oates then talked about ragtime and segued into Mississippi John Hurt’s “Stack O Lee.” You can’t get any more Americana than that! John said he had recently been to Bristol Tennessee where Jimmie Rodgers recorded his next number, “Miss the Mississippi and You.” Don’t tell anyone, but I liked John’s version better than the original! Favorites for me were the Oates-penned “Arkansas” and “Edge of the World,” which reminded me of Steve Miller back in the '70s.   “Maneater” was originally written in a reggae style. Daryl Hall changed it to a pop song, and the rest is history. John played the original version, way too cool! He closed with a rootsy version of “You Make My Dreams Come True.” The band and crowd alike looked like they were thoroughly enjoying themselves. I know I did.

Amy Helm: Daughter of the late legendary drummer from The Band, Levon Helm. Amy stands on her own two feet somewhere between elevated rock and swamp gospel. Her dynamic vocals on “Odetta” instantly made me a fan. I loved “Rescue Me” and the title cut from her new album, “This Too Shall Light,” with it’s swinging groove and spiritual overtones. The highlight for me was hearing T-Bone Burnett’s “River of Love,” a song Burnett’s ex-wife Leslie Phillips recorded decades ago. Amy’s guitarist was having some technical problems and didn’t get to play on several numbers. Although he is integral to Helm’s style, her energetic voice carried the songs beautifully. Amy, you are making your father proud. 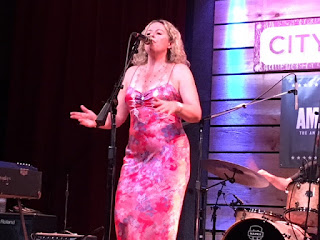 Mountain Heart: I convinced Chuck to stick around for a couple of Mountain Heart songs. After all, we had met guitarist Seth Taylor when we picked up our badges earlier in the week. I’m happy we waited to hear them! On hearing the upbeat “Got No Complaints” and the inspirational ballad “More Than I Am,” I an instant enthusiast for this contemporary bluegrass band! 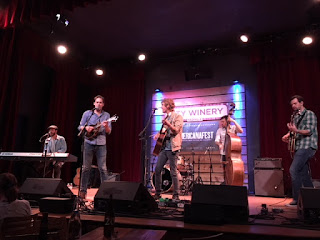 I’m pretty tired as I write this review, but I wouldn’t have missed these shows for the world. I’m sure Mr. Chuck Whiting is sleeping now with his cats snuggled beside him. Pleasant Dreams.

Posted by Chuck Whiting at 6:18 PM