Standing in line to get into City Winery for the Viewing Party for the 17th annual Americana Fest Honors & Award Show, I met Rachel Guttmann, an entertainment lawyer who stood behind me. She’s very personable, and a lot of fun to be around. The woman in front of me was interested in making a career change to an entertainment lawyer and had lots of questions. Rachel couldn’t have given her better advice, warning about student loan debt and a lot of long hours at a desk doing research. She also expressed the joy she has because she loves what she does and enjoys building a relationship with her clients. In fact, she was at City Winery to catch Molly Tuttle’s (a client of her firm) set after the award show. Meeting people like this is what makes Americana Fest so enjoyable. We are one big family! 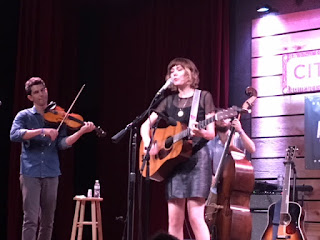 My plan was to leave before the awards show was over and head to Mercy Lounge. But Rachel’s enthusiasm for Molly Tuttle and the song Molly played on the award show made me decide to stay. Did I mention Tuttle won "Best Instrumentalist of the Year?" Tuttle’s claw hammer, flat and cross picking are superb. Combined with her reed-like voice, one realizes this is a woman with a long and successful career ahead of her. She played several numbers from her upcoming album "High Road," all killer!  I loved the driving “Save This Heart of Mine” and the heart-wrenching “A Million Miles Away” written with Steve Poltz and Jewel. I’m so glad I stayed for her set! 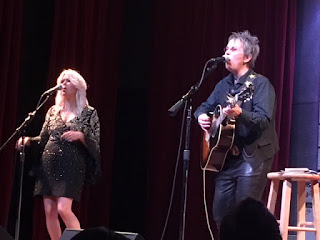 I decided I may as well stick around for Mary Gauthier, who was up next. I had seen her several years ago at the Belcourt, and have always appreciated her artistry. But this set gave me a whole new regard for Mary. Over the last five years, Gauthier has been writing with military veterans and their spouses. While listening to their stories, she crafted them into songs. These became the basis for her new album, "Rifles & Rosary Beads."  Songs from this CD are what she presented to us tonight, along with backing vocalist Jamie Harris. “War After the War,” written with military wives, reveals how they feel like the invisible victims of the war. “Who's gonna care for the ones who care for the ones who went to war? There's land mines in the living room and eggshells on the floor. I lost myself in the shadow of your honor and your pain. You stare out of the window as our dreams go down the drain.”  Nothing light-hearted here! 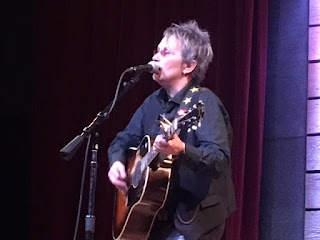 Mary described one of her co-writers as a “bad ass,” a female who led the first all-women squadron. They flew Obama! Over the years, many of her command committed suicide. The national average is 22 a day. The song they came up with, “Soldiering On,” is quite sobering. Mary enunciated every word as she sang “What saves you in the battle, can kill you at home... A soldier, soldiering on.”

Once in a while, it’s good to hear of the unpleasant realities that surround us. Thank you Ms. Gauthier for touching my emotions and my conscience tonight.  Bravo!

(Story and photos by Wil Comstock)