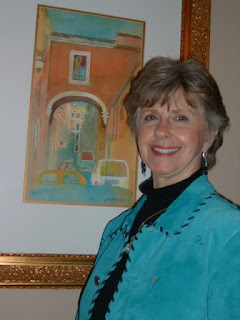 NASHVILLE, Tenn. (April 2012) -- Gail McDaniel, an acclaimed watercolor artist/instructor who has served as an associate member of the Winsor & Newton Creative Artist Network of London, England, will teach a series of watercolor painting classes in Middle Tennessee this spring and summer for artists at all levels.


*  Two separate watercolor painting classes will be offered to beginning, intermediate and advanced artists on selected Tuesdays beginning May 1 at the Brentwood United Methodist Church, 309 Franklin Road.  The classes will meet from 9 a.m.-noon and 6-9 p.m. on May 1, 8, 15, 22 and 29 and July 10, 17 and 24.  Tuition is $150 for eight, three-hour sessions.


Because space is limited for the classes, reservations are required.  Both check and credit card payments are accepted.  For more information or to register, contact the artist by phone at (615) 599-5115 or send an inquiry to gail@gailmcdanielart.com.  Individuals can learn more about the artist/instructor and view her artwork at http://www.gailmcdanielart.com.


McDaniel has taught watercolor workshops on three continents and in Central America.  More than 1,000 artists from 36 different states (including Alaska and Hawaii), the District of Columbia, Australia, Brazil, Canada, Guatemala, Japan, Mexico, the Philippines and South Korea have studied with the artist.  She has taught 11 workshops at historic Ghost Ranch in New Mexico, a landmark where the late Georgia O’Keefe lived and painted.


"This is a wonderful opportunity for developing watercolor artists," said McDaniel, a traditional watercolor artist who is best known for her vibrant use of colors when depicting images from nature and real life. "I'll be demonstrating the techniques, shortcuts, and concepts that I have developed or learned by doing, reading or studying with others.  I show my students everything I know, holding nothing back.  My goal is to inspire them without making them feel overwhelmed."


McDaniel has helped raise almost $90,000 for the arts in area public schools through the "Students and Friends of Gail McDaniel Awards".  The fund-raising effort earned McDaniel and her husband, Ken, a nomination in the "volunteer innovator" category of the 2009 Mary Catherine Strobel Award.  She was invited to be the featured artist for the "Martin's Master Show" in Brentwood, Tenn., in November 2009.  She recently received an award for "Excellence in Community Service" from the Travelers Rest Chapter of the National Society of the Daughters of the American Revolution and was inducted into the Cave City, Ky., Hall of Fame.


In 2005, McDaniel was commissioned to paint the invitation cover for "A Little Night of Music", a PENCIL Foundation fund-raiser starring LeAnn Rimes.  A local newspaper recently spotlighted the artist after she created a poster commemorating the 50th anniversary of the Brentwood Chamber of Commerce.


McDaniel, who lives in Williamson County, gained international notoriety in 2001 when she was named an associate member of the Winsor & Newton Creative Artist Network in London, England, and invited by directors of the "Art in Provence" program to conduct an eight-day watercolor workshop in Dieulefit, France.


In 2000, she became a member of the arts faculty of Cheekwood Botanical Garden & Museum of Art in Nashville, teaching weekly art classes.  In 2001, she traveled to Giverny, France, and painted in Monet’s Garden.  The same year, she was commissioned to paint a promotional streetscape of four homes for Newmark Homes and five other paintings for the Nashville Home Builders Association/SunTrust Bank 2001 "Parade of Homes". She has judged local, regional and statewide art shows, including a statewide competition at the Tennessee State Fair in Nashville.