Cool Pepper Disc to Release New Single by The Impressions 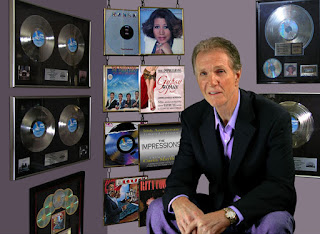 "Caught in the Middle", a song first recorded by The Impressions in 1986, has been re-mastered for release through iTunes, Amazon, emusic and other online music retailers. Michael produced the recording at his Suite 900 recording studio in the former United Artists Tower on Nashville's Music Row.  The song, which was penned by LA tunesmiths Harold Johnson and Ron Kersey, features performances by The Impressions' Fred Cash, Sam Gooden, Smoky Hampton and Ralph Johnson.
(Photo: Jerry Michael in his studio)
"I am working to make The Impressions' hidden musical treasures available online for the first time," said Michael, who garnered success as a tunesmith and publisher with the hit "Play the Game Tonight" (Kansas) and other cuts by acts such as Pure Prairie League, Aretha Franklin, The Oak Ridge Boys and Shirley Ceasar.  "'Caught in the Middle' is a love song with a cool groove.  It's been in our music vault for more than 25 years."


Cool Pepper 's latest single follows the 2011 release of "The Impressions' 50th Anniversary Salute to Curtis Mayfield", a CD featuring 17 Mayfield-penned hits, including "Keep on Pushin'", "Amen", "People Get Ready", "It's All Right", "Woman's Got Soul", and "Talking About My Baby".  The label has also released a rare extended recording of the 1960s smash "Gypsy Woman" and the 1980s single "Never Too Much Love".  All selections are also downloadable at http://www.CoolPepperDisc.com. Orchard Music Group is handling worldwide digital distribution.


"There was no group, artist or band who did more for the Civil Rights movement than Curtis Mayfield and The Impressions," Michael added.  "Their sense of compassion and unity clearly shows on these unforgettable recordings."


Led by Curtis Mayfield, The Impressions became a powerhouse group of the "Soulful Sixties" with a consistent string of chart hits. Arrangements and vocal harmonies helped set the band apart. The group even managed to take a stand against the arrival of The Beatles as chart dominators.  When the British Invasion started in 1964, The Impressions racked up no less than five Top 20 hits that year, all crafted and tailored by Mayfield.  Mayfield died in 1999 after racking up numerous hits with The Impressions and as a solo artist.  The group continues with Cash, Gooden and Regie Torian.


Michael has achieved success as a recording artist for Capitol and Mercury/Smash Records; a music publisher; a songwriter; a record producer; and a studio owner.  He also has served as the owner of a booking agency and concert promotion company.  His songs have been featured on gold, platinum and/or multi-platinum albums by top recording acts in pop, rock, R&B, country, adult contemporary and gospel, including Aretha Franklin, The Four Tops, Kansas, Pure Prarie League, Paul Overstreet, The Oak Ridge Boys, Rita Coolidge, Dobie Gray, Exile and Shirley Ceasar, among others.  As a former member of the popular 10-piece soul band The Entertainers, he performed on concert stages in Las Vegas, Lake Tahoe and top venue circuits across the nation.  For many years, he owned a state-of-the-art recording studio called Suite 900 on Nashville's Music Row.   His Cool Pepper Disc record label spotlights artists in various musical formats.


For more information about "Caught in the Middle" and other new Cool Pepper Disc recordings, visit http://www.CoolPepperDisc.com or send an e-mail message to michael.ent@comcast.net.