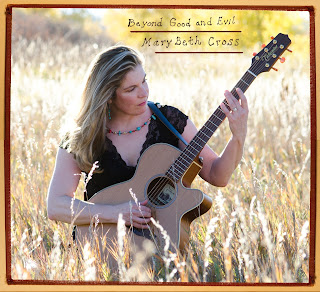 The artist’s latest album, “Beyond Good and Evil”, celebrates the pioneer spirit of the American frontier with original songs and cover tunes. The free event will include live music, hors d’oeuvres, a full bar, and prize giveaways.

Recorded in Nashville, “Beyond Good and Evil” features performances by eight-time International Bluegrass Music Association “Fiddler of the Year” Stuart Duncan. Cross spent the past year penning songs reflecting the spirit and grit of the pioneers who blazed a trail from the East to the West in search of what they treasured most: beauty, adventure, a land to call their own, new opportunities for work, and freedom from oppression.

“All of these are part of the collective tapestry of a country that continues to forge on and grow despite great adversity,” said Cross, who performed last summer at the Spiritual Project’s “10th Anniversary Gala” at the University of Denver. “The choices, sacrifice and yearning for a place that feels like home remain timeless.”

“Beyond Good and Evil” is being promoted nationally to folk-Americana radio by Nashville-based Bill Wence Promotions.

An accomplished vocalist and tunesmith, Cross moved to Denver in the 1990s to pursue a nursing career. She has emerged on the regional and national music scene with appearances on radio station KRFC-FM’s “Live @ Lunch” show at Colorado State University and musical performances at the Summit Foundation’s “Great Rubber Duck Races” in Breckenridge, Colo., and the “Rockygrass Academy Band Scramble” in Lyons, Colo. Cross, who holds a nursing degree from the University of Wisconsin-Madison, will speak and perform at the National Association of School Nurses annual conference in Orlando, Fla., in June 2013.

To learn more about Mary Beth Cross or her new album, “Beyond Good and Evil”, call (303) 842-1587, send an email message to MaryBeth@MaryBethCross.com, or visit http://www.MaryBethCross.com or http://www.reverbnation.com/marybethcross.