Leather & Lace is a family oriented country rock band in Clarion, Pa., featuring veteran musicians Andrew Weckerly, Darla Weckerly-Warren, David Weckerly, and Bill Warren. After opening for Colt Ford with standing ovations at the Washington County Fair near Pittsburgh, they are on their way to local, regional and national success. 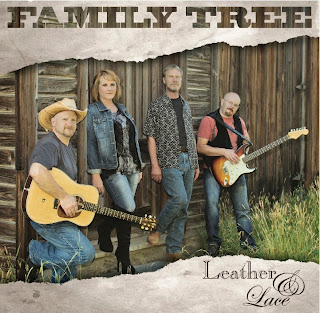 The Weckerlys founded Leather & Lace in 2011 to continue a storied family tradition that started with musical grandfathers in the Allegheny foothills of Pennsylvania. They bring heart, grit and soul to the stage with hints of Zac Brown Band and Little Big Town -- yet with a passionate, high-energy country rock sound that is all their own.

Leather & Lace immediately began to receive major bookings and radio airplay after its first album, "Family Tree", was released in 2013. The project, which was produced in Nashville by Kim Copeland, includes original songs about romance, temptation, heartbreak, faith and forgiveness. The band has already performed at noted venues such as the Washington County (Pa.) Fair, the Canfield (Ohio) Fair, and the Peek'n Peak Resort & Spa in Clymer, N.Y. Selections from the project, including the title cut, are receiving radio airplay.

"Our song, 'Family Tree', pretty much represents what we're all about," said David Weckerly, who was more than happy to join his brother and sister, members of the former duo Southwind. "We depend on each other during good and hard times, performing our music to celebrate, heal, and just let loose. That's the way it's always been in our family. Our love of country, music and faith in God pours out with every performance."

The band's one to three-hour shows include popular originals from the album such as "Family Tree", "Red" "Rain on the Windshield", "Ready to Fall" and "If I Run". Audiences also enjoy creatively arranged covers such as "Toes"/Zac Brown Band, "Pontoon"/Little Big Town, "Whenever You Come Around"/Vince Gill, "Folsom Prison Blues"/Johnny Cash, "Down South Jukin'"/Lynyrd Skynyrd, "Seven Bridges Road"/Eagles, and "Copperhead Road"/Steve Earl.

The act is receiving rave reviews from music industry professionals across the nation.

"Leather & Lace is an outstanding band," says Jeff Lash, a board member for the Washington County (Pa.) Fair. "They sound awesome and harmonize second to none. They are a very easy band to work with. They came ready to play and had a great interaction with the crowd. They did an excellent job opening for Colt Ford."

"This band is destined for greatness," notes Nashville producer Kim Copeland. "The vocals are powerful, the harmonies are infectious, and the songs are hits. They are a triple threat in every way. Three distinctive lead singers with a sibling blend both excite and astound. Leather & Lace has great musicians and performers as well."

"I get to listen to lots of new country artists as part of my job," says Bill Hughes, host of the "Rising Stars" show for radio stations Y 99.5-FM, 101.7 WJSQ-FM and WYGO-AM in Tennessee. "Listening to Leather & Lace's new album, 'Family Tree', is pure pleasure from beginning to end, and I'll be sharing every track with my 'Rising Stars' listeners. My prediction is that the band is going to enjoy a very large family of new fans real soon."

All of the band members carry life-changing family and musical experiences to Leather & Lace.

Andrew, Darla and David tear up when they talk about their grandfathers, Lawrence "Babe" Elmadollar and "Stormin'" Norman Weckerly. Impromptu performances by the coal miners at backwoods music gatherings in the 1930s eventually led to a courtship between "Babe's" daughter, Lorraine, and "Stormin's" son, Darl.

The Weckerly music legacy continued when the three grandkids backed up "Babe" on a weekly radio program. Andrew and Darla later pursued a 15-year career as members of the popular country duo Southwind, playing venues across the region. Darla also teaches music for a youth correctional facility.

Venturing out on his own, David served as a lead soloist for the Penn State University Choir and later as the co-producer of the CD, "Neon Skies", a collaboration with his brother Andrew. Ironically, he also has carried on the family tradition in the coal industry as a mechanical engineer for Joy Mining Machinery.

Darla didn't know it at the time, but her marriage to touring Canadian musician Bill Warren would complete the framework for Leather & Lace.

More tears (and lyrics) come when the siblings reflect on their mother's miraculous recovery from a life-threatening stroke and the heartbreak of coal mining loved ones who have lost everything. When the four musicians got together to "jam" for the first time, their emotions came pouring out. But leaving their individual music roads behind wasn't easy. Rave reviews from fair operators, fans, friends and family members changed everything. With major performances already under their belts, including a rousing opening for Colt Ford in Pittsburgh, they are ready to make a big impact on the country music scene.