The WannaBeatles Featured on 'From Me To You' Beatles Tribute Video

NASHVILLE, Tenn. -- The WannaBeatles of Nashville, Tenn., have joined forces with 19 fellow Beatles tribute bands from around the world to help create a "global relay video" of performances celebrating the 50th anniversary of the release of the Fab Four's first hit, "From Me to You". 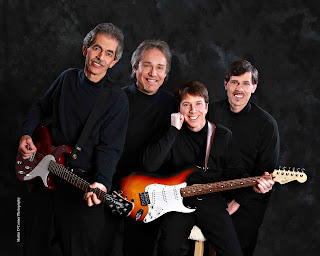 The Grammy-nominated band (Nathan Burbank, Bryan Cumming, Dennis Scott, and David Toledo) holds the distinction of being one of only three U.S. acts to participate in the worldwide effort.
Liverpool’s award-winning The Beatles Story attraction, in conjunction with the world-famous Cavern Club, has compiled a music video that features musicians from the United Kingdom, Hungary, Brazil, Japan, Slovakia, Switzerland, Canada, France, Spain, Australia, Israel, Argentina and the United States. Each band was asked to record part of the classic "From Me To You". The performances were later edited into a video collage lasting three minutes and 24 seconds. The video can be viewed at http://youtu.be/PowillF6CGA.
Performances begin and end at Liverpool’s world-famous Cavern club, where the Beatles’ career began. The single "From Me To You", which was released in the United Kingdom on April 11, 1963 (May 27 in America), was co-written by Lennon and McCartney while the group was touring the UK with Helen Shapiro. Also appearing in the video are the New England acts All Together Now! and Union Jack.
"The WannaBeatles and I are proud to represent Nashville and the USA in this worldwide celebration," said Scott, a singer and guitarist for the group. "The Beatles gave us 'From Me To You', and this global effort is a great way of saying thanks 'from us to them'."
The "From Me To You" video is part of the official events program of "Liverpool Celebrates 50 Years of the Beatles". Various events through 2014 will celebrate key milestone dates in the history of the world's most famous band.
The WannaBeatles, themselves, are no stranger to world recognition. They had the honor of walking the Grammy Red Carpet in 2012 for their spoken word album, “Fab Fan Memories – The Beatles Bond.” The Grammy-nominated recording featured Louise Harrison, George Harrison’s big sister. After losing the award to the invincible Betty White, the band decided to honor the star with a new song and video, "Oh Betty!" It features The WannaBeatles as a '60s-style singing quartet (with a little help from a sweet Betty White look-alike). That video is available for viewing at http://www.youtube.com/watch?v=d_9TG-qwgKU.
"It's no secret that the Beatles were influenced by the sounds coming out of Nashville," said Toledo, drummer/percussionist for the WannaBeatles. "We are so glad to live in a town whose songwriters and players are Beatles fans through and through."
To find out more about the "From Me To You" world tribute to the Beatles video and The WannaBeatles, visit http://wwwTheWannaBeatles.com or send an e-mail inquiry to dsmusic1@me.com .
###
Posted by Chuck Whiting at 2:07 PM

Email ThisBlogThis!Share to TwitterShare to FacebookShare to Pinterest
Labels: Beatles Story, Beatles Tribute Bands, Cavern Club, From Me To You, From Me To You Video, Liverpool, Nashville Music Scene, The Beatles, The WannaBeatles
Location: Nashville, TN, USA